UNHCR/A.O. Barry
Tuareg refugees from Mali who have been forced to flee fighting, arrive at Fassala village on the border with Mauritania.
10 February 2012

The first of four cargo planes landed in Mauritanian town of Nema today carrying 300 tents, according to Adrian Edwards, a spokesperson for the UN High Commissioner for Refugees (UNHCR).

The agency has initially bought 1,200 tents to shelter refugees arriving in Mauritania, 2,000 for Niger and 500 for Burkina Faso. The tents will be flown to those countries from stockpiles in Cameroon and Ghana, Mr. Edwards told reporters in Geneva.

Trucks will also be used to transport basic relief items such as sleeping mats, blankets, jerry cans, mosquito nets and kitchen sets. Two trucks carrying 40 tons of aid are on the way from Accra, the Ghanaian capital, to Niger, where they are due to arrive by the middle of next week.

Meanwhile, at Mauritania’s Fassala border crossing with Mali, Mauritanian authorities and UNHCR are working around the clock to provide the refugees with food, clean water and shelter. The agency has already sent several convoys of food and other relief items, with the distribution of 15-day rations being carried out by local authorities.

Most of the 10,887 Malian refugees in Mauritania are Tuareg, many of whom are fleeing from nearby Léré. The Mauritanian authorities have identified a potential camp site in M’Bera, 50 kilometres from the border, and are working with UNHCR on a plan to move the refugees to the new location.

The same site had hosted around 30,000 Malian refugees who had fled clashes between the army and the Tuareg rebels in the 1990s.

Yesterday, UNHCR’s emergency team in Niger interviewed a group of Malian refugees in Sinegodar area, some 278 kilometres northeast of the capital, Niamey.

“Refugees told us that their hometown in Anderamboukane is now empty,” said Mr. Edwards. “They say that the population fled from the Malian border town following a 26 January attack by rebels targeting homes, looting, poisoning water points, burning personal property and businesses and taking away animals.”

They expressed their intention to return briefly to salvage whatever property and livestock may have been left behind following the raids and plunder.

In Burkina Faso, UNHCR has released aid from its local stocks to be distributed to Malian refugees as well host communities in the arid northern region of the country. An estimated 8,000 people have crossed into Burkina Faso from Mali.

Since the start of the Tuareg insurgency in northern Mali on 17 January, between 25,000 and 30,000 people have sought refuge in Burkina Faso, Mauritania and Niger. Some of those entering Niger are citizens of that country who were living in Mali.

Meanwhile, the Secretary-General’s Special Representative and head of the UN Office for West Africa (UNOWA), Said Djinnit, today visited Bamako, the capital of Mali, in an effort to gather information on the conflict.

Mr. Djinnit met with President Amadou Toumani Toure and Foreign Minister Soumeylou Boubèye Maiga and stressed the need for an immediate cessation of hostilities so that ongoing efforts to establish dialogue can succeed, and to allow the delivery of aid to those affected by the conflict.

He also reiterated Secretary-General Ban Ki-moon’s statement on Wednesday voicing deep concern over the outbreak of fighting and stressing his disquiet over the large-scale humanitarian consequences of the fighting.

“These population movements are an additional burden on Mali and the host countries that are already facing a very worrying food crisis,” said Mr. Djinnit in a press release. 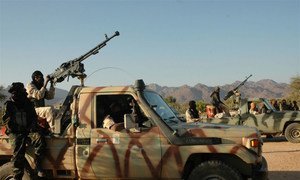