Media reports indicate that Libyan authorities yesterday finalized the laws, which set out details on the holding of elections later this year to choose a national assembly, which will have the task of drawing up a new constitution.

In a statement released in Tripoli, the capital, the UN Support Mission in Libya (UNSMIL) underlined that the electoral process, including the drafting of the new laws, is Libyan-led. The mission has provided technical assistance to the National Transitional Council (NTC) and is ready to assist the newly created Higher National Electoral Commission.

“The first free election for over four decades will provide an opportunity for Libyans to exercise their democratic rights to participate in a process which will shape the future of their country,” the statement noted.

“UNSMIL remains committed, as mandated by the UN Security Council, to assist and support Libyan national efforts to undertake political dialogue, promote national reconciliation and embark upon the electoral process.”

UNSMIL’s head, Ian Martin, who is also the Secretary-General’s Special Representative for Libya, travelled to the coastal city of Sirte yesterday to meet with representatives of the local council, the military council and civil society. Sirte was one of the cities hit hardest during the fighting last year.

“I wanted to see for myself the extent of destruction this city suffered as a result of the war,” he said. “Amid this destruction, I was deeply impressed by the efforts of the people who have already done much to bring life back to the city, with as yet little support.”

Mr. Martin said UN staff will return to Sirte in the coming days to discuss further how the world body can assist in the reconstruction and recovery of the city. 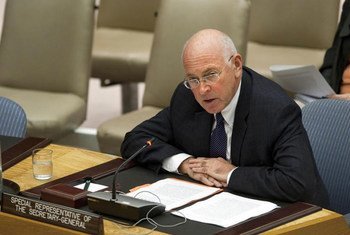 25 January 2012
Libya is going through a difficult transition, having inherited weak state institutions and an absence of political parties, the top United Nations envoy in the country told the Security Council today, adding that the interim Government is committed to addressing the challenges.