Secretary-General Ban Ki-moon voiced hope today that the resignation of the President of the Maldives and the appointment of his deputy as the new leader will help to peacefully end the ongoing political crisis in the Indian Ocean country.

Mohamed Nasheed announced his resignation earlier today and will be succeeded by Vice-President Mohammed Waheed Hassan. The move followed recent street protests and mounting tensions between parts of the Government and the military.

In a statement issued by his spokesperson, Mr. Ban expressed “his strong hope that this handover of power, which has been announced as a constitutional step to avoid further violence and instability, will lead to the peaceful resolution of the political crisis that has polarized the country in recent months.”

Mr. Ban called on all Maldivians to “refrain from violence and engage constructively” in tackling the challenges facing the country, adding that he hoped the Maldives will be able to build on “the important gains” it has recently made in establishing democracy and the rule of law.

“The Secretary-General acknowledges the important contributions of President Nasheed, the country’s first democratically-elected president, to the establishment of democracy in the Maldives and his role in raising international awareness of the dangers of climate change and rising seas.”

Later this week Assistant Secretary-General Oscar Fernandez-Taranco will lead a United Nations political mission to the Maldives to help the country deal with its recent tensions. Mr. Fernandez-Taranco is slated to meet with Government officials, opposition leaders and civil society representatives. 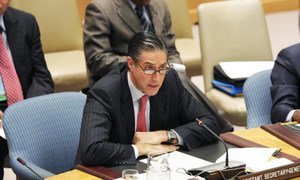 A United Nations political team heads to the Maldives next week for talks on how to help support the Indian Ocean archipelago in its transition to democracy.