UNHCR/G.Dubourthoumieu
UNHCR staff help prepare Angolan refugees for their return home from the Democratic Republic of the Congo.

7 February 2012
The United Nations refugee agency reported today that it has embarked on the implementation of a set of strategies to conclude three of Africa’s long-standing refugee crises that involved helping people uprooted by old conflicts in Angola, Liberia and Rwanda.

The strategies, which were first announced by the UN High Commissioner for Refugees (UNHCR) in 2009, will entail finding permanent solutions for as many Angolan, Liberian and Rwandan refugees as possible, in their countries of origin or asylum, according to Adrian Edwards, the agency’s spokesperson in Geneva.

Solutions include scaling up voluntary repatriation, as well as providing assistance packages to help former refugees reintegrate, or securing an alternative legal status that would allow them to continue to reside in countries of asylum.

After decades in exile, many Angolan, Liberian and Rwandan refugees established strong ties with their host communities, including through marriage.

“UNHCR hopes that countries of asylum will convert refugee status into residency permits for such persons, including ultimately citizenship when domestic legislation allows,” said Mr. Edwards.

In West Africa, for example, Liberians can obtain residence and work permits, allowing them to remain in the country of asylum as citizens of a member State of the Economic Community of West African States (ECOWAS).

Cessation clauses are built into the 1951 Refugee Convention and the 1969 Organization of African Unity Refugee Convention. They allow refugee status to end once fundamental and durable changes have taken place in the country of origin and the circumstances that led to their flight no longer exist.

“The application of cessation by States does not mean that all Angolan, Liberian and Rwandan refugees automatically lose their refugee status or that the countries of origin no longer produce any refugees,” said Mr. Edwards.

Cessation of refugee status will not apply to those who still have a well-founded fear of persecution, nor will it affect refugees who have compelling reasons for not wanting to go back to their countries of origin because of past persecution.

Mr. Edwards said that the UNHCR is working closely with governments to protect asylum rights of those in such circumstances. Cessation would also not apply to any Angolan, Liberian or Rwandan refugees who have pending asylum claims. 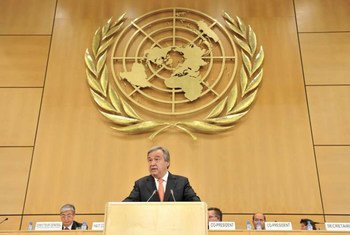 7 December 2011
The United Nations refugee chief today called on the international community to assume its shared duty to protect and assist millions of forcibly displaced and stateless people around the world, as he opened the largest-ever conference on the issue in Geneva.