The United Nations refugee agency has deployed staff to assist some 20,000 people who have been forced to flee fighting between Government troops and rebel Tuareg groups in Mali.

Most of those uprooted by the violence in the Azawad region of northern Mali that began in mid-January have fled to Niger, Burkina Faso and Mauritania, according to the UN High Commissioner for Refugees (UNHCR).

“In the past three weeks, at least 10,000 people are reported to have crossed to Niger, 9,000 have found refuge in Mauritania and 3,000 in Burkina Faso,” agency spokesperson Adrian Edwards told reporters in Geneva today.

Some of those who crossed into Niger have settled very close to the volatile border, he said. Many of the new arrivals are sleeping in the open and have little access to shelter, clean water, health services, and food.

While most of those who recently fled Mali are Malians, recent arrivals in Niger also include nationals of Niger who had been living in Mali for decades, Mr. Edwards noted. Many have been crossing the border between the two countries regularly to find grazing land for their cattle.

UNHCR is planning to send aid for 10,000 people from its stockpiles in the region, as well as additional staff to assist the displaced.

Meanwhile, the agency’s office in Ouagadougou, the capital of Burkina Faso, has reported the arrival of some 3,000 Malian Tuaregs following attacks on their homes and businesses in the Malian capital, Bamako, and in the nearby town of Kati last week.

Many of the new arrivals are staying with host families in Ouagadougou and Bobo Dioulasso, 320 kilometres south-west of the capital, while other new arrivals have been reported in the north-west of the country. An inter-agency mission, including UNHCR, is scheduled to go there by the end of the week to assess the needs of the people.

In addition, UNHCR has sent several missions to the Hodh el Chargi region of Mauritania, where over 9,000 people have arrived since 25 January. The mainly ethnic Tuareg Malian refugees come from the region of Léré on the other side of the border.

The Mauritanian authorities, with UNHCR’s help, are taking care of the new arrivals, whose key needs include food, shelter and other basic items. The agency plans to field an emergency support team to boost its presence in the country. 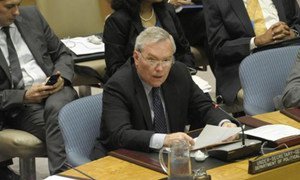 The United Nations political chief today called for the establishment of a mechanism to address the myriad challenges facing countries in West Africa’s Sahel region, which, he said, include a humanitarian crisis, lack of socio-economic development, insecurity and the threat of terrorism.