According to media reports, Syrian troops have continued their assault on the city of Homs, using heavy artillery and shelling against civilians as part of their wider crackdown against a public pro-democracy movement that emerged early last year.

“Such violence is totally unacceptable before humanity,” Mr. Ban said in a statement issued by his spokesperson, which noted that the Secretary-General was particularly “appalled” by the mounting death toll in the country. The UN recently reported that more than 5,000 people have perished.

On Saturday, 13 of the Security Council’s 15 members voted in favour of a draft resolution backing an Arab League plan to resolve the Syrian crisis, but China and Russia exercised their vetoes. A veto by any one of the Council's five permanent members means a resolution cannot be adopted.

“The lack of agreement in the Security Council gives no licence to the Syrian authorities to step up the attacks on the Syrian population. No government can commit such acts against its people without its legitimacy being eroded,” Mr. Ban added.

He reminded Syrian authorities that they would be held accountable under international human rights law for all acts of violence perpetrated against the civilian population.

Mr. Ban called on the Syrian Government and the international community to “redouble efforts” to stop the violence and seek an inclusive, Syrian-led political process that “respects the will and legitimate aspirations of the Syrian people to a democratic and pluralistic system.” 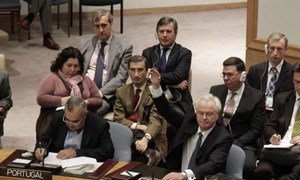 Secretary-General Ban Ki-moon voiced deep regret after Security Council members were today unable to agree on a resolution backing an Arab League plan to resolve the crisis in Syria, where thousands of people have been killed over the past year since authorities crackdown on a pro-democracy uprising.