6 February 2012
Recent reforms in Myanmar have already had a positive impact, the United Nations expert on the human rights situation in the country said today, but warned that serious challenges remain and must be addressed to strengthen the transition to democracy.

“There is a risk of backtracking on the progress achieved thus far,” said Tomás Ojea Quintana, the Special Rapporteur on the human rights situation in Myanmar, at the end of his fifth mission to the country. “At this crucial moment in the country’s history, further and sustained action should be taken to bring about further change.”

The UN has welcomed the recent decision by Myanmar’s President Thein Sein to grant amnesty and set free a significant number of prisoners of conscience, and acknowledged other reform measures by authorities in the South-East Asian nation, including dialogue between the Government and pro-democracy leader Aung San Suu Kyi.

“Moving forward cannot ignore or whitewash what happened in the past,” said Mr. Ojea Quintana.

“Facing Myanmar’s own recent history and acknowledging the violations that people have suffered will be necessary to ensure national reconciliation and to prevent future violations from occurring,” he said, adding that he believes that justice and accountability, including measures to ensure access to the truth, are fundamental to the reform process.

He stated that the upcoming by-elections on 1 April will be a key test of progress. “It is essential that they are truly free, fair, inclusive and transparent,” he stressed, adding that he has been informed that “the use of international observers was under consideration.”

During his six-day mission, Mr. Ojea Quintana held talks with Government ministers, members of Parliament, the Attorney-General, the Supreme Court’s Chief Justice, and representatives of the Union Election Commission.

He also met with Aung San Suu Kyi, members of the recently-established National Human Rights Commission, and representatives of civil society and ethnic parties. Mr. Ojea Quintana also conferred with three prisoners of conscience in Insein prison, as well as some of those recently released.

He urged the international community “to remain engaged and support and assist the Government during this important time.” 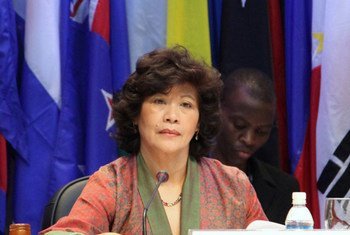 26 January 2012
A top United Nations official called today on the Government of Myanmar to boost partnerships between the private and public sectors to support the country’s recent reforms as well as to help accelerate development and job creation in the country.