The UN declared an end to famine conditions in Somalia today, but warned that the crisis in the Horn of Africa is not over and requires continued efforts to restore food security and help people resume normal lives.

The United Nations declared an end to famine conditions in Somalia today, but warned that the crisis in the Horn of Africa is not over and requires continued efforts to restore food security and help people resume normal lives.

The number of people in need of emergency humanitarian assistance in Somalia has dropped from 4 million to 2.3 million, or 31 per cent of the population, according to a new report by the United Nations and the United States Government. Additionally, 325,000 children are acutely malnourished.

“Long-awaited rains, coupled with substantial agricultural inputs and the humanitarian response deployed in the last six months, are the main reasons for this improvement,” José Graziano da Silva, Director-General of the UN Food and Agriculture Organization (FAO), told a press conference in Nairobi, Kenya, after visiting southern Somalia.

“However, the crisis is not over,” he added. “It can only be resolved with a combination of rains and continued, coordinated, long-term actions that build up the resilience of local populations and link relief with development.”

A severe drought ravaged the Horn of Africa last year, causing food shortages that claimed the lives of tens of thousands of people in Somalia and led to the declaration of famine by the UN in six areas of the country. At the height of the crisis, 750,000 people in the Horn of Africa were at risk of death.

A famine is declared when the following measures of mortality, malnutrition and hunger are met: at least 20 per cent of households in an area face extreme food shortages with a limited ability to cope; acute malnutrition rates exceed 30 per cent; and the death rate exceeds two persons per day per 10,000 persons.

The number of people still requiring emergency assistance in Somalia, Kenya, Ethiopia and Djibouti, according to FAO, stands at 9.5 million – down from 13.3 million in September last year.

The FAO-managed Food Security and Nutrition Analysis Unit (FSNAU) and the Famine Early Warning System Network (FEWS NET) of the US Agency for International Development (USAID) attributes the improved situation in Somalia to a combination of adequate rainfall in late 2011 and substantial humanitarian assistance.

This allowed farmers to produce and buy more food, according to a news release issued by FAO, which as part of its emergency response, distributed seeds and fertilizers to Somali farmers. The agency also rehabilitated 594 kilometres of irrigation canals and treated 2.6 million livestock at risk of diseases and infections associated with drought.

In the last six months, FAO, the UN Children’s Fund (UNICEF), the World Food Programme (WFP) and international non-governmental organizations (NGOs) have also operated cash-for-work and food-voucher programmes, instead of relying only on food and input handouts.

“While sustained humanitarian efforts and a good harvest have helped to mitigate the crisis, we must not forget that the progress made is fragile,” warned UN humanitarian chief Valerie Amos.

“Without continued and generous support from the international community, these gains could be reversed. Continued conflict and lack of access to people in need remain major operational challenges,” added Ms. Amos, the Under-Secretary-General for Humanitarian Affairs and UN Emergency Relief Coordinator.

“We also need to focus on building up people’s ability to cope better with future droughts and food crises. We must keep our attention firmly focused on Somalia and ensure that we do not fail the most vulnerable.”

The UN Humanitarian Coordinator for Somalia, Mark Bowden, voiced similar concern that the country could “easily slip back into very severe conditions,” unless the current levels of assistance and support are maintained.

“We mustn’t give the impression that we’ve solved the problem,” he told UN Radio. “What we’ve done is actually reduced the very high levels of mortality and malnutrition which caused so much suffering. And we are now in the position to make even further progress to help people get back to normal lives. But we’ve still quite a long way from a return to normal and secure situations.”

Meanwhile, the UN High Commissioner for Refugees (UNHCR) reported today that expectations of upcoming seasonal rains and improved farming prospects in parts of Somalia have prompted some 7,000 Somali refugees in Ethiopia and Kenya to temporarily return home.

“Some told us they were going back to Somalia to take advantage of upcoming seasonal rains to resume farming in their villages,” UNHCR spokesperson Adrian Edwards told reporters in Geneva. “They also say they left their women and children in the refugee camps but plan to rejoin them once the harvest is over, as they fear it is not safe to stay in Somalia.”

UNHCR stressed that any return to Somalia must be well-informed and voluntary, and that the country’s situation is not yet conducive for organized repatriation. “While famine and drought conditions have eased across Somalia, insecurity continues to cause displacement within the country,” noted Mr. Edwards.

More than 293,000 Somali refugees fled conflict and famine into the neighbouring countries of Kenya, Ethiopia, Djibouti and Yemen since January last year.

♦ Receive daily updates directly in your inbox - Subscribe here to a topic.
♦ Download the UN News app for your iOS or Android devices.
Somalia|famine 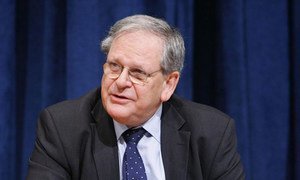 The top United Nations relief official in Somalia said today that international humanitarian support last year in the face of drought and famine in the country succeeded in saving numerous lives, but the situation remains fragile, with millions of people in need of continued assistance.