2 February 2012
The United Nations relief chief today visited areas in South Sudan hit by recent ethnic violence and met some of the victims of a vicious cycle of raids and reprisal attacks, describing what she had seen as “a terrible situation” with people having lost loved ones, property and livelihood.

“I am extremely concerned that humanitarian premises were specifically targeted, and we lost critical supplies, which slowed our relief operation,” said Valerie Amos, Under-Secretary-General for Humanitarian Affairs, speaking to reporters after visiting Pibor and Walgak in Jonglei state.

“I urge all parties to respect humanitarian premises and personnel, so that we can help the people of Jonglei,” she said.

Deadly clashes between the Lou Nuer and Murle communities in late December and early January displaced tens of thousands of civilians and prompted UN agencies to launch a major humanitarian operation to assist those in need.

“We are working to meet basic life-saving needs – food, water, medicine, household items. Many of the areas we need to reach are very remote and can only be reached by air, making this operation hugely expensive compared to assistance delivered by road,” said Ms. Amos, who is also the UN Emergency Relief Coordinator.

She emphasized her concern over the humanitarian situation in the country as a whole, saying it remained “extremely precarious” and could deteriorate fast, with food shortages having already worsened this year.

“If oil production is shut down, many people will feel the effects – humanitarian needs will inevitably increase, and the combined efforts of the Government, the aid community and the donors will not be enough. The scope of this crisis cannot be ignored,” she said.

Authorities in South Sudan have threatened to shut down oil production because of a lack of progress in talks to resolve a dispute with neighbouring Sudan over revenues and tariffs for the use of Sudan’s infrastructure to export the commodity.

The UN and humanitarian partners have this year requested donors to provide over $760 million for humanitarian needs in South Sudan. “But we can only do so much. Government leadership is vital,” said Ms. Amos.

She said the UN appreciated Government leadership in the highly complex return of internally displaced persons (IDPs) to their villages of origin, but stressed that returns must be voluntary, and conducted in safety and dignity.

“Since my last visit here in 2010, signs of change in South Sudan are already visible, and I can see it here in Juba. But perhaps the most significant change is in the hearts of the people, proud of their hard-won nation, the newest independent country in the world. The world must not let them down,” said Ms. Amos. 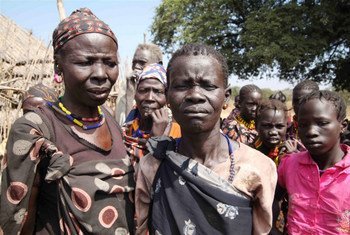 1 February 2012
The United Nations relief chief today underlined the enormity of the humanitarian challenges facing South Sudan on the first day of her three-day visit to the fledgling country, highlighting the needs of returnees, an influx of refugees, internal displacement as a result of ethnic conflict and endemic poverty.