The United Nations refugee chief today thanked the Pakistani Government for its generosity towards Afghans who have sought refuge in the country, while also calling for creating the right conditions in Afghanistan that will promote large-scale voluntary returns.

“At a time when many countries are closing their doors to those fleeing violence and persecution, the generosity of the people and the Government of Pakistan towards Afghan refugees deserves greater recognition and support on the part of the international community,” said UN High Commissioner for Refugees António Guterres.

Wrapping up a two-day visit to Pakistan, he called for additional international solidarity with the country as well as with Iran, both of which continue to host large numbers of Afghan refugees after more than 30 years.

Nearly three million registered Afghan refugees remain in the region today, including 1.7 million in Pakistan and one million in Iran.

Last year, just over 50,000 Afghan refugees returned home from Pakistan, down from nearly 110,000 in 2010. Despite the decline, the number of Afghan returns last year represented the largest refugee repatriation programme in the world.

“The priority now is to create conditions inside Afghanistan that will allow for large-scale voluntary repatriation,” said Mr. Guterres.

While in Pakistan, the High Commissioner met with Prime Minister Yousuf Raza Gilani and Foreign Minister Hina Rabbani Khar to discuss an agreement reached in Dubai this week between Pakistan, Iran, Afghanistan and the UN refugee agency (UNHCR) to pursue a regional strategy aimed at finding durable solutions to the Afghan refugee situation.

The new strategy will be presented at a conference to be held in Switzerland in May that will seek support for programmes inside Afghanistan which will foster returns while providing additional support to communities that host Afghan refugees.

According to UNHCR, the lack of livelihood opportunities and shelter, as well as insecurity, are the most frequently cited reasons for not returning to Afghanistan.

Those who return through the agency’s voluntary repatriation programme receive an average of $150 per person to cover transport as well as the initial cost of settling back home. In total, 5.7 million Afghan refugees have returned from Pakistan and Iran, representing nearly a quarter of Afghanistan’s population.

♦ Receive daily updates directly in your inbox - Subscribe here to a topic.
♦ Download the UN News app for your iOS or Android devices.
Afghan|refugee 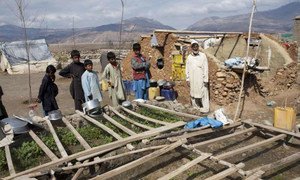 Number of UN-assisted returns to Afghanistan drops in 2011

The number of Afghan refugees returning home has dropped substantially this year, with some 60,000 repatriating in the first 10 months compared to more than 100,000 over the same period in 2010, the United Nations refugee agency reported today.