UN Photo/Shareef Sarhan
Secretary-General Ban Ki-moon (left) is greeted by a student during his visit to the school for girls run by UNRWA in Khan Younis, southern Gaza.
2 February 2012

Secretary-General Ban Ki-moon travelled today to the Gaza Strip, where he underlined his commitment to continue working for peace and stability in the Middle East, and voiced his concern about the need to increase humanitarian assistance for Palestinians.

Mr. Ban is currently in the region to encourage Palestinian and Israeli authorities to continue the talks they started in Jordan earlier this month – and to assess the progress and challenges on the road to peace.

During his visit, Mr. Ban toured a United Nations Relief and Works Agency (UNRWA) housing project and a girls’ school. He also met with children who suffered serious injuries during the conflict, and said he was deeply moved by their stories.

In a press encounter this morning, Mr. Ban emphasized that the UN would continue its work in the region, which ranges from infrastructure projects such as building housing units, schools and water treatment facilities, to humanitarian assistance and longer-term initiatives involving the people of Gaza to stimulate economic and social growth.

“There needs to be further, immediate and more far-reaching changes, including an end to the Palestinian divide,” Mr. Ban told reporters. “I am pressing hard for policy changes to enable the United Nations and others to carry out our essential work,” he said.

Earlier this month, the UN launched an emergency appeal for just over $300 million to assist Palestinians living in the Gaza Strip and the West Bank who are still dealing with the effects of a conflict that ended three years ago, as well as various humanitarian needs.

As part of his visit, Mr. Ban was supposed to meet with business and civil society representatives, but this was cancelled when dozens of Palestinians staged a protest as Mr. Ban’s convoy crossed into Gaza from Israel. Protesters, many of whom were relatives of Palestinian prisoners in Israeli jails, threw shoes and other objects at the convoy.

Mr. Ban, who met last night with the Palestinian Minister of Prisoners Affairs, Issa Karake, said he understood and shared their frustrations and concerns.

“That is why I am here again for the third time. There are very dire social, economic and humanitarian problems. People need to be able to move freely. Goods must be imported and exported without any restrictions. That is why I have been urging the Israeli authorities to lift completely and unconditionally the restrictions.”

Mr. Ban later travelled to Erez in Israel, where he toured Sapir College and met with survivors of a rocket attack last year against a school bus. Speaking at the school, he said that nothing justified the indiscriminate firing of rockets and mortars into Israel.

“It is completely unacceptable to target and terrorize citizens on a near-daily basis,” Mr. Ban said. “People have had to reinforce schools like this, hospitals and bus stops. They have to think constantly about where the nearest shelter is. This is what you must do for your safety. But let us be clear: it is not how anyone, anywhere, should have to live,” he added.

Later in the day, in an address to the Herzliya 2012 conference in Tel Aviv, the Secretary-General discussed the Arab Spring reform movement and its impact on the region, emphasizing that Israel’s future is not in isolation but standing side by side with a newly democratic Middle East.

“We should welcome this historic – this inevitable – evolution. We should not perpetuate the fallacy that the Arab world is not ready for democracy,” Mr. Ban said. “Everywhere, people are expressing a fundamental human yearning… the universal hunger for dignity, freedom and human rights.”

Mr. Ban also met with Israeli Defence Minister Ehud Barak and with the Chairperson of the Kadima Party and the Leader of the opposition in the Knesset, Tzipi Livni, with whom he discussed the status of the Middle East peace process and other regional developments.

During a meeting this evening, Mr. Ban urged Israeli Defence Minister Ehud Barak to take further steps to improve conditions in Gaza and expressed to him his hope that both parties remain engaged in the talks hosted by Jordan.

Mr. Ban also met with the Chairperson of the Kadima Party and the Leader of the opposition in the Knesset, Tzipi Livni, with whom he discussed the status of the Middle East peace process and other regional developments. 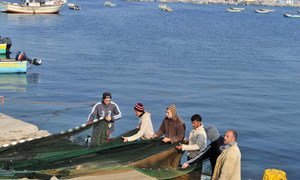 The United Nations today launched an emergency appeal for just over $300 million to assist Palestinians living in the Gaza Strip and the West Bank who are still dealing with the effects of the conflict that ended three years ago as well as various humanitarian needs.