United Nations refugee and human rights officials said today that they have confirmed that the infrastructure and facilities at a new camp in Iraq for residents of the settlement formerly known as Camp Ashraf meet international standards, as stipulated in last month’s agreement on voluntary relocation between the UN and the Iraqi Government.

The UN and the Iraqi Government on 25 December signed a Memorandum of Understanding (MoU) on the voluntary relocation of several thousand Iranian exiles living in Camp New Iraq, previously known as Camp Ashraf, in the north-eastern part of the country.

The UN High Commissioner for Refugees (UNHCR) and the human rights office of the UN Assistance Mission for Iraq (UNAMI) said arrangements for the relocation of Camp New Iraq residents to the new Camp Liberty are progressing after it was confirmed that the facilities and the infrastructure had met international humanitarian standards.

“I am grateful to the UNHCR and the human rights team for their expertise,” said Martin Kobler, the Secretary-General’s Special Representative for Iraq. “This brings us a step further in ensuring that proper conditions are in place for voluntary relocation of Camp New Iraq residents.”

UN monitors are ready to start round-the-clock human rights monitoring during the transport of residents from Camp New Iraq, as well as on their arrival at Camp Liberty, currently built to accommodate 5,500 people. UNHCR is also ready to start refugee status determination as soon as residents start arriving in the new camp, according to a press release issued by UNAMI.

The Iraqi Government will organize the modalities of transporting people from Camp New Iraq to Camp Liberty and other relevant issues with the residents. The UN stands ready to facilitate those efforts if requested, Mr. Kobler said.

“It is important that [the] MoU is implemented in letter and spirit,” he added, noting that the agreement “stands only for a peaceful solution and a voluntary relocation of Camp New Iraq residents.”

“The United Nations’ consistent position is that a violent outcome is unacceptable. The MoU paves the way for UNHCR to conduct the verification and refugee status determination (RSD) processes, which is a necessary first step to resettle the residents in other countries and enjoy their freedom and liberty,” he said.

“Member States have a crucial role in helping to resolve the situation of Camp New Iraq residents and I do urge them again to accept residents in their countries. This is a critical contribution to the humanitarian solution we are all seeking,” Mr. Kobler added.

Situated in the eastern Iraqi province of Diyala, Camp New Iraq camp houses several thousand members of a group known as the People’s Mojahedeen of Iran. 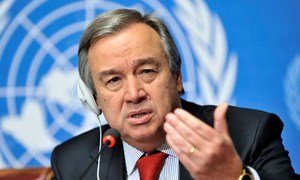 Secretary-General Ban Ki-moon has welcomed an agreement between the United Nations and the Iraqi Government that provides for the voluntary relocation of residents of a camp hosting Iranian exiles, saying the pact lays the foundation for a peaceful and durable solution to the issue.