Wrapping up his six-day visit to the African country, Assistant Secretary-General for the Rule of Law and Security Institutions, Dmitry Titov, stressed that efforts need to be increased in the areas of security and justice as well as in the implementation of the Doha Document for Peace in Darfur (DDPD) signed in Qatar last year.

Mr. Titov emphasized that the recent positive steps by the Government and one of the rebel groups to implement the agreement represent a new stage for Darfurians and underscored the importance of keeping this momentum going by bringing non-signatory parties into the peace process.

The Sudanese Government and the rebel Liberation and Justice Movement (LJM) signed the DDPD in July last year, with the document forming the basis for a permanent ceasefire and comprehensive peace agreement to end the fighting that began more than eight years ago.

During his visit Mr. Titov met with Government officials in Khartoum as well as local officials in North Darfur. He underlined the need to strengthen cooperation between UN Police and local law enforcement forces in conjunction with the capacity of the local judiciary and prosecution service.

He also reiterated the supporting role of the UN-African Union (AU) joint peacekeeping operation in Darfur (UNAMID) to help the country build up its security capabilities, but stated that to do this UNAMID requires freedom of access to all areas concerned, as well as the lifting of restrictions on the movement of UN staff. In this context, he stressed that the AU and the UN are here to assist the authorities of Darfur to establish peace.

“We are here to understand the current needs and priorities of the mission, and provide support and guidance,” Mr. Titov said.

Citing changing attitudes in the Government’s cooperation with UNAMID, Mr. Titov discussed the need for additional advocacy, awareness raising, training, capacity building and other forms of support in the areas of rule of law and security institutions. Regarding ongoing discussions between UNAMID and the Government on ordinance disposal activities, it was agreed that those activities will continue while discussions proceed on expanded cooperation in this area.

During his visit, Mr. Titov also visited the Abu Shouk community policing centre and Tawila camps for internally displaced persons (IDPs), where he met with IDP representatives and registered their concerns for safety and security at their places of origin and the level of humanitarian support.

UN and Intel unveil initiative on technology-based training for midwives 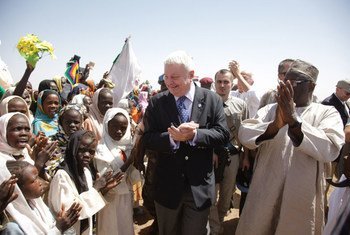 11 January 2012
The head of the United Nations department of peacekeeping told the Security Council today that initial steps by the Sudanese Government and one of the rebel movements in Darfur to implement the peace document signed in Qatar last year have been promising, and urged the international community to support their efforts.