Delegates from 65 countries attending a United Nations-backed conference in the Philippines have agreed to step up efforts to protect the world's oceans from land-based activities, stressing the marine environment's central role in the transition to a low-carbon, resource-efficient green economy.

The Manila Declaration was adopted yesterday on the final day of the Global Conference on Land-Ocean Connections (GLOC), co-organized by the Government of the Philippines and the United Nations Environment Programme (UNEP).

The four-day event brought together environment ministers, marine scientists, non-governmental organizations, representatives from financial institutions and other interested bodies, aiming to formulate new policies and actions to improve the sustainable management of oceans and coastal areas.

Signatories to the declaration reaffirmed their commitment to developing policies to reduce and control wastewater, marine litter and pollution from fertilizers.

The agreement contains a total of 16 provisions focusing on actions to be taken between this year and 2016 at international, regional and local levels.

Among them is a call for countries to develop guidance and policies on the sustainable use of nutrients to improve the efficiency of fertilizers such as nitrogen and phosphorous. Doing so would bring economic benefits for farmers, while mitigating negative environmental impacts such as algal blooms caused by agricultural run-off.

“The Manila Declaration signals a new way forward for all of us,” said Amina Mohamed, UNEP Deputy Executive-Director, who led the agency's delegation at the meeting.

“The UN Conference on Sustainable Development (Rio+20) in June is an excellent opportunity to take the Manila Declaration to a global audience and initiate action to reduce the impact of land-based activities on the marine environment,” she said.

“It is essential that we sustain our momentum to achieve on-the-ground improvements in the health of ocean and coastal ecosystems, for which the continued and co-ordinated effort of the international community is vital,” added Ms. Mohamed.

Signatories to the Manila Declaration underlined the importance of healthy oceans and coasts in supporting livelihoods and food security – especially in Small Island Developing States.

The declaration calls for collaborative action to reduce the vulnerability of coastal communities to climate change and to tackle biodiversity loss, persistent organic pollutants (POPs) and ocean acidification resulting from land-based activities.

Prior to the signing of the Declaration, UNEP and partners launched the “Green Economy in a Blue World” report, which outlines ways for a green economy transition across six marine-based economic sectors.

The report argues that the health and productivity of marine and coastal ecosystems, which are currently in decline across the globe, can be boosted by shifting to a more sustainable economic paradigm that taps their natural potential – from generating renewable energy and promoting eco-tourism, to sustainable fisheries and transport.

Recommendations include targeted financial support from governments for marine-based renewable energy projects, such as wind and wave power, to harness the considerable opportunities for green job creation in the sector. 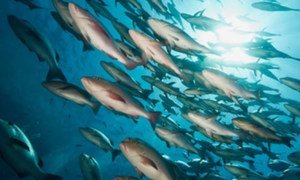 The economic productivity of the marine sector can be significantly boosted by shifting to a more sustainable approach that focuses on green activities such as renewable energy, eco-tourism and sustainable transport, according to a United Nations report released today.