27 January 2012
A senior United Nations official has called for an immediate end to Israel’s demolition of Palestinian homes in the occupied West Bank, as he witnessed first hand the suffering and destruction caused by this ongoing practice.

“The wholesale destruction of their homes and livelihoods is not consistent with that responsibility or humanitarian ideals,” he said.

Mr. Gaylard visited the Anata village on the outskirts of Jerusalem yesterday where he saw the ruins of seven Palestinian homes demolished earlier in the week and met with representatives of the displaced families.

Bulldozers and troops had arrived in the middle of the night of 23 January, he was told, and that 52 people, including 29 children, had been forced from their homes, which were then destroyed.

The visit by Mr. Gaylard came on the same day that the UN Office for the Coordination of Humanitarian Affairs (OCHA) released a new report showing that almost 1,100 Palestinians, over half of them children, were displaced due to home demolitions in the West Bank by Israeli forces in 2011 – over 80 per cent more than in the previous year.

The report, entitled “Demolitions and Forced Displacement in the Occupied West Bank,” added that an additional 4,200 people were affected by the demolition of structures related to their livelihoods.

Mr. Gaylard noted that these figures represent a dramatic increase compared with previous years, and that a much greater number, in the tens of thousands, remain under threat of dispossession, demolition and displacement.

“The current policy and practice of demolitions cause extensive human suffering and should end,” he stated. “Palestinians urgently require ready access to a fair and non-discriminatory planning and zoning system that meets their needs for growth and development.” 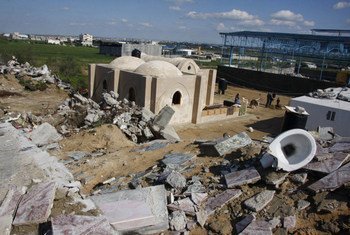 26 January 2012
Almost 1,100 Palestinians, over half of them children, were displaced due to home demolitions in the West Bank by Israeli forces in 2011 – over 80 per cent more than in the previous year – according to a United Nations report released today.