27 January 2012
The Democratic Republic of the Congo (DRC) received $9.1 million today from the United Nations Central Emergency Response Fund (CERF) to fight off cholera, which has affected more than 22,000 people and killed 500 over the past year in the central African country.

“Despite all our previous efforts, we have been one step behind the disease. This new funding will allow us to reinforce the entire response chain,” said UN Humanitarian Coordinator in DRC Fidele Sarassoro.

In a news release, the Office for the Coordination of Humanitarian Affairs (OCHA) reported that there has been a spike in cases in recent weeks, with the majority of them occurring in eastern provinces where cholera is endemic.

OCHA underlined that in addition to the actual caseload, there are thousands of collateral victims as the disease is hampering agricultural and commercial activities, school attendance, family well-being and the livelihood of households that are already among the world’s poorest.

The UN and other humanitarian agencies have been working with the Congolese Government for over a year to combat the disease, and the response has included establishing cholera treatment centres, providing water chlorination points and refurbishing water points, conducting awareness campaigns using the media, training of medical staff, and disinfecting boats.

However, OCHA stressed that in spite of this multi-pronged response strategy, efforts to curtail the disease have yet to be successful. “The UN and NGOs [non-governmental organizations] expect the CERF funding to boost the response to the disease that is compounding an already grave humanitarian situation for millions of Congolese,” OCHA said.

The UN Children’s Fund (UNICEF) and the World Health Organization (WHO) will receive $4.4 million and $4.7 million, respectively, and will work with a number of international and national NGOs as well as Congolese authorities to maximize the impact of their efforts.

CERF was created in 2005 to pre-position funding to respond in a timely fashion to humanitarian crises. Last year, it allocated $4 million to fight cholera in the provinces along the Congo River. 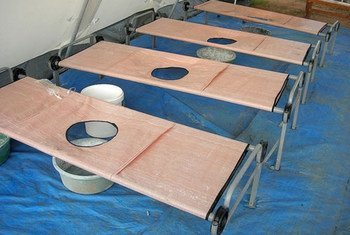 29 December 2011
The cholera outbreak that has infected thousands of people across the Democratic Republic of the Congo (DRC) is almost over in the worst-affected province, but fresh cases are being recorded in two other areas, the United Nations humanitarian arm reports.