The United Nations refugee agency today announced new strategies to ensure uninterrupted assistance and services in its largest complex in Kenya, including training and mentoring of refugees as well as involving them in the day-to-day running of the Dadaab camps.

“Refugees have always had a role in making camps work. However, at Dadaab that role is being expanded,” said Andrej Mahecic, spokesperson for the UN High Commissioner for Refugees (UNHCR), during a press briefing in Geneva. “Hospitals, for example, have remained open throughout this difficult period, staffed by refugees, nationals, and a limited number of international staff,” he said.

Part of the new strategy includes reaching out to different groups within the refugee population such as elders, the business community and youth so they can contribute in distinct ways. Mr. Mahecic stressed that refugee leaders and refugees working for partner agencies are being trained to identify individuals who require urgent attention so they can get life-saving assistance immediately.

“In situations when international or national staff cannot get to camps the health posts are managed by refugee staff who have been trained over the years to provide basic medical services and refer more serious cases to the camp hospitals,” Mr. Mahecic said. “Refugee staff are also getting refresher courses on management of sensitive cases of sexual or gender-based violence,” he added.

According to UNHCR, since the beginning of this year, over 150 vulnerable people and families have been identified by the agency and its partners, and brought to the agency’s offices in Dadaab where they have received medical and psychological help.

Refugees are also helping to improve the camps’ conditions by building new latrines on sandy and rocky ground, and by collecting and transporting solid waste by donkey carts to allocated waste disposal sites.

In addition, UNHCR is also engaging with young refugees to enhance their skills and work experience. “More than 30 camp schools remain open and are run by refugee teachers. Despite insecurity, the Kenyan National Exams took place in the camps at the end of last year and the results were an improvement in the average score in comparison to last year. The exams were made possible because the community patrolled the schools and guarded the gates,” Mr. Mahecic said.

He stressed that UNHCR will continue to identify specific groups for outreach such as business and religious leaders, and would also strengthen awareness through radio and other means such as free mobile texting.

The Dadaab refugee complex shelters more than 460,000 refugees. A third of this refugee population arrived in 2011 alone, fleeing the conflict, drought, famine and human rights abuses in Somalia. The camps in Dadaab opened two decades ago and were originally designed to host some 90,000 refugees.

♦ Receive daily updates directly in your inbox - Subscribe here to a topic.
♦ Download the UN News app for your iOS or Android devices.
Kenya|refugee 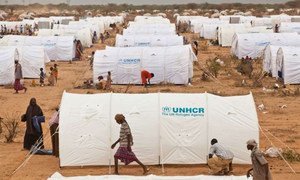 The United Nations refugee agency said today it is increasingly concerned about insecurity in and around camps hosting hundreds of thousands of Somali refugees in the Horn of Africa.