The security situation in Côte d’Ivoire is stabilizing nine months after the end of the violence that shook the country following presidential elections in late 2010, but the underlying causes of instability and unrest have not been fully addressed, the United Nations top official in the West African country told the Security Council today.

“The security situation is stabilizing, those displaced have started to return, the economy is starting to show resilience and the legislative elections were held successfully,” Bert Koenders, the Secretary-General’s Special Representative and head of the UN Operation in Côte d’Ivoire (UNOCI), told the Council in a briefing.

The post-electoral crisis erupted in Côte d’Ivoire when former president Laurent Gbagbo refused to step down after he lost a UN-certified election to Alassane Ouattara, who was eventually sworn in after Mr. Gbagbo surrendered in April last year.

“The root causes of instability and potential triggers of violence have remained,” said Mr. Koenders. “Important challenges and issues relating to security and national reconciliation should not be underestimated and require the political attention of the Council,” he said.

Mr. Koenders underscored that the Ivorian Government still needed UNOCI’s support, to restore stability, through the reform of institutions, facilitating disarmament, demobilization and reintegration of former combatants, protection of civilians and aiding in the return of refugees and internally displaced persons.

Mr. Koenders told the Council that the holding of legislative elections last month in a relatively peaceful atmosphere was a significant achievement for Côte d’Ivoire, and marked a major step forward in the restoration of constitutional order and the introduction of more inclusive governance.

He is mandated by the Council to certify that all stages of the electoral process were held in accordance with international standards, and promised to do so after the national institutions have evaluated the process.

Overall, the security situation has remained relatively calm, but incidents of insecurity in the western areas of the country, including criminal activity and the threat of cross-border movement of armed groups has continued to pose a threat to Côte d’Ivoire’s stability, Mr. Koenders added. 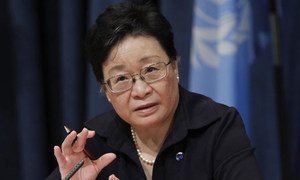 A senior United Nations relief official stressed today that assisting the people of Côte d’Ivoire in overcoming their current humanitarian difficulties will lay the foundation for the country’s transition to reconstruction and development after last year’s bloody post-election violence.