26 January 2012
Yemen’s forthcoming presidential election will be an opportunity for the country to embark on a transitional process that strengthens national dialogue and leads to a political system that will be more inclusive and open to greater participation by all citizens, says the Security Council.

In a press statement issued last night after a briefing by Jamal Benomar, the Secretary-General’s Special Adviser for Yemen, the Council welcomed the progress towards the implementation of the political transition, based on the Gulf Cooperation Council (GCC) initiative.

Warring factions in Yemen signed an agreement in November on a transitional settlement under which President Ali Abdullah Saleh agreed to hand over power to Vice President Abed Rabbo Mansour al-Hadi. A new Government of National Unity was formed and presidential elections have been scheduled for 21 February.

The Council reiterated that the GCC initiative and its implementation mechanism must be fulfilled in a transparent and timely manner, and in a spirit of inclusion and reconciliation.

In his briefing yesterday, Mr. Benomar told the Council that for the transition to succeed, a concerted effort is required to ensure the participation of youth and other important constituencies, including the southern movements and the so-called Al-Houthi group in the north, in the political process.

“As an immediate step, all efforts should now be focused on ensuring the holding of peaceful elections,” he added.

Voicing concern over deteriorating security and the increasing presence of Al-Qaida in Yemen, the Council reiterated its unequivocal condemnation of terrorism in all its forms and manifestations.

“The members of the Security Council urged all the parties in Yemen to reject violence, refrain from provocations, and cooperate with the Military Affairs Committee to fully implement the [GCC] implementation mechanism and Security Council resolution,” said the statement that was issued to the press by Ambassador Baso Sangqu of South Africa, which holds the Council’s presidency this month.

“The members of the Security Council reiterated that all those responsible for human rights violations and abuses, including acts of violence, must be held accountable. They reaffirmed their commitment to the territorial integrity, sovereignty and unity of Yemen.”

The Council also stated that it remains gravely concerned over the humanitarian situation in Yemen, including the severe food insecurity, alarming levels of malnutrition, and increasing numbers of internally displaced persons.

It urged donors to support the $447 million humanitarian appeal for Yemen this year, and called on the Government of National Unity to begin to address the humanitarian and economic challenges facing the country. The Council also welcomed the World Bank’s efforts to resume its programmes in Yemen. 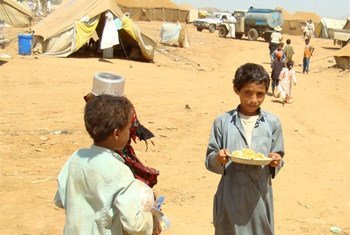 UNICEF warns on high rates of malnutrition among children in Yemen

25 January 2012
The United Nations Children’s Fund (UNICEF) has warned that half a million children in Yemen could die or suffer physical and mental damage as a result of malnutrition, unless sufficient resources are made available to alleviate the effects of conflict, chronic poverty and drought.