The outgoing United Nations envoy in Liberia today stressed the need for reconciliation in the country, adding that this is an essential step to consolidate stability and to ensure that the progress achieved by the democratic elections held last year can continue.

“Last year, Liberia passed an historic milestone in conducting its second democratic elections since the end of the conflict. This was an important undertaking which, once again, demonstrates the will of the Liberian people,” said Ellen Margrethe Løj, Special Representative of the Secretary-General and head of the UN peacekeeping mission in Liberia (UNMIL).

“However, peace cannot be complete without reconciliation. Experiences from around the world have shown us than an incomplete peace is often a prelude to renew conflict,” she told reporters in Monrovia during her last press briefing as Special Representative.

Ms. Løj emphasized that a lot more needs to be done to ensure that Liberia’s future is inclusive, and stressed the role of young people in reconciliation as well as the importance of Liberians initiating this process.

“I have said it many times that true reconciliation has to be home grown. It cannot be imposed from abroad. I cannot tell three or four of you Liberian how to reconcile...you will not even listen to me. You have to get together and talk and be willing on how to reconcile and deal with what has to be dealt with for that reconciliation to take place.

“Through dialogue and inclusion, I am highly confident that Liberia will continue its work towards lasting peace,” she added, while reiterating that UNMIL would continue to provide support to the population, while simultaneously encouraging and providing advice for national initiatives.

“Liberians have demonstrated that they can be in the driver’s seat and that they have chosen the path to sustainable development. And progress is reflected in the way UNMIL supports Liberia today. From being first in line with a robust military and police presence, the Mission is today standing second in line focusing on providing advisory support to security and rule of law institutions,” Ms. Løj said.

She expressed her gratitude to the people of Liberia and appreciation for the warmth and generosity during the four years of her tenure. 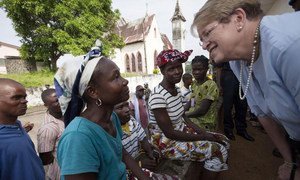 Secretary-General Ban Ki-moon today congratulated the people of Liberia for exercising their right to vote in the presidential run-off election earlier this month and commended the country’s authorities for conducting free, fair and transparent elections.