The United Nations peacekeeping chief stressed today the need for stability and reconciliation in the Democratic Republic of the Congo (DRC), which has experienced a tense political climate since its presidential elections in November.

Under-Secretary-General for Peacekeeping Operations Hervé Ladsous, who is currently on an official visit to the DRC, reaffirmed the UN’s commitment to help the vast African nation through its mission (MONUSCO) to prevent conflict and ensure future elections occur under better conditions.

“There are indeed many lessons to be learned from the elections,” Mr. Ladsous said in an interview with MONUSCO’s radio station, Radio Okapi. “The UN and MONUSCO will work to ensure that this internal process that is determined by the people of Congo alone can occur under better circumstances each time….

“There are certainly measures we can take to ensure that this essential process allows for national reconciliation under the best of conditions, respecting the rule of law, and with the objective of finding lasting solutions for the country.”

Mr. Ladsous said the main purpose of his visit, which began on Tuesday, is to experience firsthand the work of the mission as well as to assess what it can do to advance reconciliation. During his visit, the first to the DRC since his appointment in September, Mr. Ladsous will meet with several Government officials as well as politicians and UN representatives.

He will also travel to the eastern town of Goma – a region where armed groups such as the Democratic Forces for the Liberation of Rwanda (FDLR) are constantly active – to meet with provincial and local authorities.

Mr. Ladsous stressed that to end the activity of such groups, the Government must reaffirm its authority over its entire territory and that MONUSCO will be working with the Government to strengthen the country’s army as well as protect civilians.

“It’s necessary that we continue to make progress in our work with national authorities to find solutions to consolidate the State, the rule of law and facilitate national reconciliation, something everybody wants to succeed,” he said. 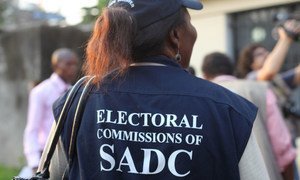 The United Nations peacekeeping mission in the Democratic Republic of the Congo today called on the country’s electoral authorities to review the issues raised by independent observers about the recent DRC presidential and parliamentary polls, saying there were “significant irregularities” in the results process.