25 January 2012
Libya is going through a difficult transition, having inherited weak state institutions and an absence of political parties, the top United Nations envoy in the country told the Security Council today, adding that the interim Government is committed to addressing the challenges.

“The former regime may have been toppled, but the harsh reality is that the Libyan people continue to have to live with its deep-rooted legacy; weak, at times absent, state institutions, coupled with the long absence of political parties and civil society organizations, which render the country’s transition more difficult,” said Ian Martin, the Secretary-General’s Special Representative and head of the UN Support Mission in Libya (UNSMIL).

“This is further complicated by what was a systematic distortion of the country’s socio-political fabric,” he said.

He reiterated that security remains a major concern, noting that events over the past month highlight the risks associated with both the continued abundance of weapons on the streets, and the diverse armed “brigades” in the country with unclear lines of command and control.

In the capital, Tripoli, clashes earlier this month between rival brigades from Misrata and Tripoli resulted in several fatalities and injuries, as well as confrontation between such groups in Gheryan and al-Asab‘a, and fighting between the local population and the brigades in Bani Walid this week required high-level intervention to put an end to the violence.

“Although authorities have successfully contained these and other more minor incidents that continue to take place across the country on a regular basis, there is the ever-present possibility that similar outbreaks of violence could escalate and widen in scope,” Mr. Martin told the Council.

He said the National Transitional Council (NTC) is laying the foundation for the establishment of democratic governance, but a combination of a tight timeline, inexperience in drafting electoral legislation, shortcomings in communication and the lack of proper mechanisms for consultation have set limitations to the process of drafting the electoral law.

“The NTC and most stakeholders have remained determined that the commitment in the Constitutional Declaration to elect a National Congress by late June must be respected. This has left little time for consultations on the legislative framework, which must embody some difficult and inevitably controversial political choices,” said Mr. Martin.

The NTC’s Electoral Committee made efforts to engage the public and published the draft law, with the engagement of UNSMIL’s electoral team. “As a result, we believe that both the main electoral law and the parallel electoral administration law, which establishes a 17-member High National Electoral Commission, gained in clarity and focus,” he added.

On human rights, the UN High Commissioner for Human Rights, Navi Pillay, informed the Council of her extreme concern over the conditions of detention and treatment of detainees held by the various revolutionary brigades, noting that the International Committee of the Red Cross had visited over 8,500 detainees in approximately 60 places between March and December last year.

The majority of the detainees are accused of being loyalists of the deposed leader, the late Muammar al-Qadhafi, and include a large number of citizens of sub-Saharan Africa.

“The lack of oversight by the central authorities creates an environment conducive to torture and ill-treatment,” said Ms. Pillay, adding that her staff had received alarming reports on what was happening in places of detention.

“It is therefore urgent that all detention centres are brought under the control of the Ministry of Justice and the General Prosecutor’s Office,” she said. “Moreover, a structure and process for judicial screening of detainees should be in place immediately.”

Other areas of concern include conditions for people subjected to internal forced and involuntary displacement, the status of women and past abuses.

Ms. Pillay also highlighted the outstanding questions regarding possible civilian deaths resulting from NATO operations, and voiced hope that the ongoing probe by the organization’s commission of inquiry will shed light on the extent to which NATO forces took precautions to protect civilians. 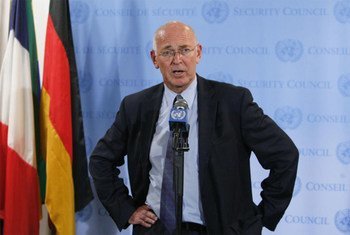 28 December 2011
Civil society must play an important role in Libya’s political transition in the wake of its civil war, the United Nations top envoy to the country said as he visited two towns in Libya’s Nafousa Mountains region.