“Yesterday’s decision is establishing individual responsibility for the post-electoral violence but also for a peaceful Kenya,” stressed Luis Moreno-Ocampo, adding that the ruling also holds international significance as it reiterates that no country has sovereignty to attack civilians.

Mr. Moreno-Ocampo said the Court was appreciative of the fact that Kenyan judges explained the decision in a public session and that there have been no reports of violence since the result.

“We also appreciate the fact that the accused appeared voluntarily before the court. This goes to show Kenya is managing its transition to a less violent future. President Kibaki yesterday committed to solve the problems of victims of violence still displaced. Victims do not have to wait for a conviction before they receive any help. The Government of Kenya has a responsibility to help its citizens,” Mr. Moreno-Ocampo said.

The ICC confirmed charges against Uhuru Muigai Kenyatta, Deputy Prime Minister and Minister of Finance; William Samoei Ruto, former Minister of Higher Education, Science and Technology; Francis Kirimi Muthaura, Head of the Public Service and Secretary to the Cabinet; and Joshua arap Sang, Head of Operations for KASS FM radio station, who are accused of being responsible for the deaths of hundreds of civilians.

Mr. Moreno-Ocampo stressed the prosecution is already preparing for trial, but its start could be delayed if judges accept the appeal that has been put forward by some of the accused.

According to the ICC, more than 1,100 people were killed, 3,500 injured and up to 600,000 forcibly displaced in the violence that followed the December 2007 elections. There were also hundreds of rapes, possibly more, and at least 100,000 properties were destroyed. 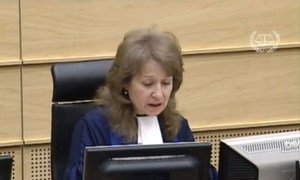 The International Criminal Court (ICC) today ruled that four prominent Kenyans, including the deputy prime minister, are to stand trial for crimes against humanity and other offences allegedly committed following general elections in late 2007.