MINUSTAH
Haitian National Police officer along with UNPOL and MINUSTAH checks the trunk of a car in Port-au-Prince.
23 January 2012

The United Nations announced today that it is investigating two cases of sexual exploitation of children allegedly committed by its police personnel in Haiti.

The first case involves UN Police (UNPOL) officers based in the capital, Port-au-Prince, while the second case involves one or more members of the Formed Police Unit (FPU) in Gonaives, UN spokesperson Martin Nesirky told reporters in New York.

“The United Nations is outraged by these allegations and takes its responsibility to deal with them extremely seriously,” stated Mr. Nesirky.

He added that the police contributing countries concerned have been informed. However, unlike cases involving UN military personnel, investigations into allegations involving UN police personnel fall under the responsibility of the UN. For this reason, a UN team was dispatched to Haiti on Saturday to investigate the allegations.

The UN Stabilization Mission in Haiti (MINUSTAH) stated in a news release that an investigation was immediately opened after the allegations were made.

In addition, the UN Police Commissioner relieved the two suspects of their duties as a precaution to prevent them from having any contact with the population and to prevent any attempts to interfere with the investigation.

“I want to reiterate my commitment to uphold the policy of zero tolerance of abuse by the staff of the Mission” said Mariano Fernández, the Secretary-General’s Special Representative and head of MINUSTAH. “Each member of the UN personnel, whether he or she is a civilian, member of the military or police, must observe a standard of exemplary conduct.

“This is a commitment that is required when joining the United Nations, anywhere in the world. We will continue to take the strictest measures to ensure, where appropriate, that the perpetrators of such acts are punished with the utmost severity,” he added.

The UN has a strategy in place to assist victims of exploitation and sexual abuse. In Haiti, MINUSTAH implements it in coordination with other UN agencies and national stakeholders. This mechanism is meant to guarantee that the victims receive medical and psychological support as fast as possible. 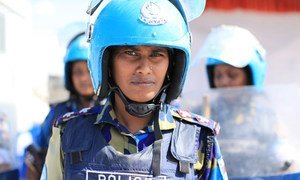 It is a lesser known reality of the earthquake that devastated Haiti on 12 January 2010 and left more than 200,000 dead. The merciless disintegration of the Haitian State created a situation of utter chaos for the country’s most vulnerable.