Experts from the United Nations International Atomic Energy Agency (IAEA) will visit Iran next week in an effort to resolve outstanding issues related to the country’s nuclear programme, it was announced today.

Last November the head of the IAEA said there is “credible” information that Iran is developing a nuclear weapon and had called on the country to agree to a visit by a high-level team to clarify the nature of its nuclear programme.

In a statement issued today in Vienna, where the Agency is based, Director General Yukiya Amano announced the upcoming visit, which will take place from 29 to 31 January.

“The overall objective of the IAEA is to resolve all outstanding substantive issues,” said the statement.

“The Agency team is going to Iran in a constructive spirit, and we trust that Iran will work with us in that same spirit,” said Mr. Amano.

Iran has repeatedly stated that its nuclear programme is for the peaceful purpose of providing energy, but many countries contend it is seeking to develop nuclear weapons.

The Security Council has imposed four rounds of sanctions against Iran, citing the proliferation risks of its nuclear programme and its continued failure to cooperate with the IAEA.

♦ Receive daily updates directly in your inbox - Subscribe here to a topic.
♦ Download the UN News app for your iOS or Android devices.
iran|nuclear 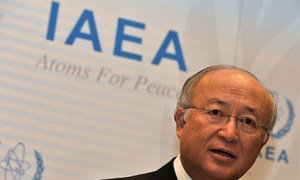 The head of the United Nations International Atomic Energy Agency (IAEA) said today there is credible information that Iran is developing a nuclear weapon and called on the country to agree to a visit by a high-level team to clarify the nature of its nuclear programme.