Secretary-General Ban Ki-moon today voiced deep concern over continuing tensions along the border between Sudan and South Sudan, as well as the current crisis over oil, saying that the situation represented a worrying deterioration in the relationship between the two countries.

The UN fully supported the efforts of the African Union High Level Implementation Panel (AUHIP) to resolve all outstanding issues between the two countries “based on the concepts of mutual viability, security and peaceful coexistence,” said a statement issued by the spokesperson of the Secretary-General.

Mr. Ban strongly urged the two parties to do everything possible to reach agreement in their current negotiations in Addis Ababa, the Ethiopian capital, under the auspices of AUHIP, to defuse the crisis over the sharing of oil revenues, and address other contentious issues that require immediate resolution, according to the statement.

“The Secretary-General’s Special Envoy, Haile Menkerios, remains on the ground, engaged to assist the negotiations in collaboration with the AUHIP,” it added.

There are, however, disagreements over some areas of the border and the sharing of oil revenues that remain unresolved. 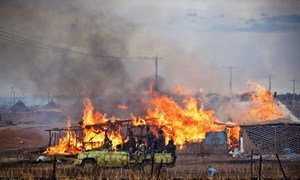 The Security Council today extended by five months the mandate the United Nations peacekeeping force for the Abyei area, which is contested by South Sudan and Sudan, stressing that the mission’s ability to do its work effectively will depend on the implementation by the two countries of earlier agreements.