Services that combine access to modern energy for heating, cooking and electricity, with measures that generate cash, supplement incomes and improve health and education would be the most effective energy solutions in Asia and the Pacific, according to United Nations analysis released today.

Services that combine access to modern energy for heating, cooking and electricity, with measures that generate cash, supplement incomes and improve health and education would be the most effective energy solutions in Asia and the Pacific, according to United Nations analysis released today.

A report by the UN Development Programme (UNDP) confirms that there can be no development without energy, and that poverty cannot be addressed sustainably without paying due attention to energy services.

The study entitled “Towards an ‘Energy Plus’ Approach for the Poor” reviewed 17 energy access projects across the Asia-Pacific region to find out what works and what does not in breaking the vicious “poverty-energy-poverty cycle.” The poor need energy to get out of poverty, but energy alone is not enough, it states.

“Energy services are often not affordable by the rural and urban poor and on their own have little impact,” says Martin Krause, who leads the UNDP regional climate, environment and energy team in Asia and the Pacific. “The poor need support to generate income so that energy becomes affordable, which in turn will improve household living standards.”

Nearly half the world’s population lacks reliable access to modern energy services. And more than 20 percent of the global population, or 1.4 billion people, remain without access to electricity.

Roughly 2.7 billion people – 40 per cent of the world’s population – depend on wood, charcoal or animal waste for cooking and heating. By 2030, household air pollution from biomass use in inefficient stoves is likely to cause more than 1.5 million deaths a year.

The lack of energy access and its impact on health, education and income continue to be a significant cause of chronic poverty, according to UNDP. Since poverty in turn inhibits access to energy services, a vicious cycle develops.

The findings indicate that most energy projects adopt a minimalist approach, focusing on the basic energy needs of the poor for lighting homes, cooking and heating.

However, “energy services per se do not reduce poverty,” says the report. “Instead, they transform people from being ‘poor without energy access’ to ‘poor with energy access’.”

“This is because the energy services provided do not open opportunities to poor households to increase their incomes. Therefore, the resources needed to acquire modern energy services continue to be limited, and energy programmes are forced to rely on perpetually unsustainable subsidies,” the report notes. 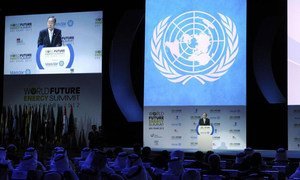 As the International Year of Sustainable Energy for All kicked off today, United Nations officials called on governments, the private sector and civil society to help expand energy access, improve efficiency and increase the use of renewables.