The United Nations World Food Programme (WFP) today welcomed the appointment of Ertharin Cousin of the United States as the new head of the Rome-based agency.

The United Nations World Food Programme (WFP) today welcomed the appointment of Ertharin Cousin of the United States as the new head of the Rome-based agency.

Ms. Cousin will replace Josette Sheeran, also a US national, whose term as WFP’s Executive Director expires in April.

“Leading WFP is a great honour and a critical link to the world’s most vulnerable,” said Ms. Sheeran following the announcement of the new appointment.

“I offer every support to Ertharin Cousin and wish her the greatest success at this critical time for the world’s most vulnerable nations and people,” said Ms. Sheeran.

The appointment of Ms. Cousin was announced today by Secretary-General Ban Ki-moon and José Graziano da Silva, the Director-General of the UN Food and Agriculture Organization (FAO).

Ms. Cousin, who has over 25 years of national and international corporate, non-profit and government leadership experience, is currently the US Representative to the UN agencies that have food and agriculture mandates – FAO and WFP – and are based in the Italian capital.

The President of WFP’s Executive Board, Jim Harvey, also congratulated Ms. Cousin on her appointment. “We have known and appreciated her as a colleague in Rome and we now look forward to working with her in her new role,” he said.

“We also congratulate the current Executive Director, Josette Sheeran, on her new appointment at the World Economic Forum that will allow her to build on her many accomplishments at WFP,” Mr. Harvey added.

Ms. Sheeran will become Vice Chairman of the World Economic Forum in April. 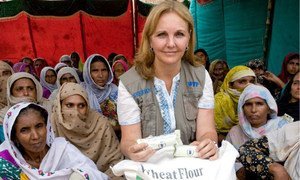 The head of the United Nations World Food Programme (WFP) announced today that she will step down after five years at the helm of the Rome-based agency.