16 January 2012
A senior United Nations relief official is in Côte d’Ivoire to assess the humanitarian situation after the bloody post-electoral crisis that rocked the country early last year and draw international attention to remaining challenges.

Catherine Bragg, Assistant Secretary-General for Humanitarian Affairs and Deputy Emergency Relief Coordinator, will also offer UN support to the Ivorian authorities to strengthen early recovery and longer-term development, notably in the western part of the country.

Focus will be on ensuring the return of internally displaced persons (IDPs) and refugees who were uprooted by the violence that erupted in Côte d’Ivoire in late 2010, when former president Laurent Gbagbo refused to step down after he lost the UN-certified election to Alassane Ouattara, who was eventually sworn in after Mr. Gbagbo surrendered in April last year.

Humanitarian priorities also include the implementation of the ongoing reform process in the area of security, disarmament, demobilization and reinsertion of former fighters into civilian life, as well as land tenure reform, the UN Office for the Coordination of Humanitarian Affairs (OCHA), said in a press release.

Ms. Bragg was joined today by the Ivorian Minister of State for Employment, Social Affairs and Solidarity, Gilbert Koné Kafana, and other UN officials for the launch of the $173 million appeal to fund humanitarian operations in support of more than three million people in need of assistance in the country this year.

“I applaud the return of over a half a million people in the last nine months, testimony to the increasing security and the resolution of the crisis and the international support, and a tribute to the hard work of the international community,” said Ms. Bragg.

“However, there are still substantial needs that require substantial resources to deal with persisting problems. This would allow voluntary and dignified return and pave the way for sustainable reintegration,” she added. Tomorrow she is scheduled to travel to western areas of the country to visit IDP sites.

Bert Koenders, the Secretary-General’s Special Representative and the head of the UN peacekeeping operation in Côte d’Ivoire (UNOCI), said that the security situation in the country was progressively improving nine months after the end of the post-electoral crisis, allowing IDPs and refugees to return to their villages. 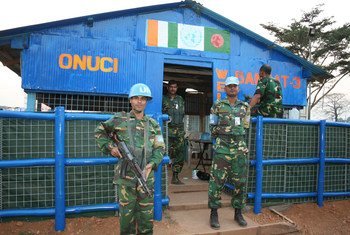