14 January 2012
Secretary-General Ban Ki-moon on Saturday paid tribute to the men and women helping to bring peace to southern Lebanon, while stressing the importance of the safety of United Nations personnel serving in one of the most dangerous missions in the world.

“Peacekeeping is always dangerous but it is especially deadly in Lebanon,” Mr. Ban said during a visit to the headquarters in Naqoura of the UN Interim Force in Lebanon (UNIFIL), which has lost 293 personnel since the mission began in 1978.

“More personnel have lost their lives serving in UNIFIL than in any other United Nations peacekeeping operation. This weighs heavily on my heart,” he stated.

Just last month, five French peacekeepers were wounded in a roadside bomb near the port city of Tyre, in what the Secretary-General said was not a random act.

In his address, Mr. Ban stressed that the safety of UNIFIL personnel was “critically important” and that he had called on Lebanese Government officials during his meetings to strengthen protection for the mission.

The Secretary-General, who arrived in Lebanon yesterday, was received by UNIFIL Force Commander Major-General Alberto Asarta Cuevas. He also undertook a brief tour by helicopter of the Line of Withdrawal – the so-called Blue Line – that separates Lebanon and Israel.

“UNIFIL is one of the oldest United Nations peacekeeping missions,” noted Mr. Ban. “It is one of the most prominent in terms of strength and resources. Most importantly, UNIFIL is playing a major role in bringing peace to this troubled region and our world.”

He noted the strong partnership with the Lebanese Armed Forces to maintain peace and stability and said UNIFIL's confidence-building role is “creating space in which the parties can seek a long-term solution to the conflict.”

The Secretary-General inspected a Guard of Honour representing various contingents from UNIFIL's 35 troop-contributing countries, and laid a wreath and observed a minute of silence in memory of the 293 peacekeepers who gave their lives in the service of peace.

This is Mr. Ban's third visit to the mission, which currently has about 12,100 soldiers. UNIFIL's Maritime Task Force, the first in a UN peacekeeping mission, currently comprises nine ships patrolling Lebanese waters. In addition, UNIFIL has about 700 national and 300 international civilian staff members.

They discussed UN support to Lebanon, the implementation of relevant Security Council resolutions and Lebanon's important contributions to the Organization, as well as regional issues, in particular the situation in Syria and its impact on Lebanon. 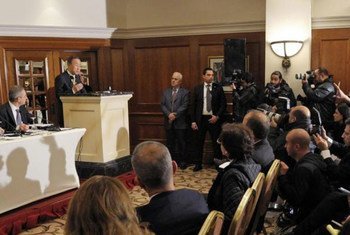 13 January 2012
The United Nations will maintain its “strong and unwavering” commitment to Lebanon, Secretary-General Ban Ki-moon pledged today as he began an official visit to the country.