Secretary-General Ban Ki-moon has commended the people of Tunisia for the progress achieved since the start of their revolution one year ago, and pledged the continuing support of the United Nations for their efforts.

“One year ago, the world was inspired by the determination of the people of Tunisia to demand democracy, freedom and dignity,” said a statement issued by Mr. Ban's spokesperson.

“Their courage echoed throughout the region, where other peoples, encouraged by the actions of their Tunisian brothers and sisters, found the courage to also make their rightful aspirations heard,” it added.

The Tunisian transition has made great progress in the past year, the statement noted, culminating in the holding of peaceful and orderly elections in October 2011 that led to the establishment of a Constituent Assembly.

“The Secretary-General commends the people of Tunisia for progress achieved, which he trusts will continue to inspire the region and the world.

“While the road to democracy is long and may not always be smooth, the United Nations remains committed to working with Tunisia and with all the nations undergoing democratic transitions to help consolidate these efforts towards meeting the legitimate aspirations of their people,” the statement said.

It was the people of Tunisia that inspired the region last year when they stood up to demand democracy and freedom, leading to the removal of the long-standing regime of Zine El Abidine Ben Ali.

Their actions sparked a wave of popular uprisings across North Africa and the Middle East, known as the Arab Spring, which also led to the toppling of regimes in Egypt, Libya and Yemen. 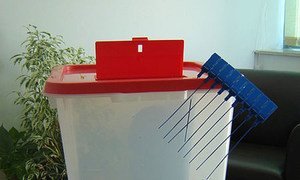 Secretary-General Ban Ki-moon has congratulated the people and interim authorities of Tunisia for the peaceful holding of the first free elections in the region since the start of the Arab Spring reform movement.