Top United Nations officials have voiced sadness at the passing of Rauf Denktash, the former Turkish Cypriot leader who died on Friday in Nicosia.

Mr. Denktash was a “long-serving and historic” Turkish Cypriot leader with whom the UN had a long relationship in the framework of UN-facilitated talks for the reunification of Cyprus and related to its peacekeeping responsibilities on the island, Mr. Ban's spokesperson said in a statement.

The Secretary-General, his Special Adviser on Cyprus, Alexander Downer, and his Special Representative for Cyprus, Lisa Buttenheim, expressed their condolences to the family of Mr. Denktash as well as to all Turkish Cypriots.

Mr. Downer and Ms. Buttenheim described the former leader as “a pre-eminent figure” whose dedication to the Turkish Cypriot community was steadfast through decades of leadership.

They reaffirmed the UN's commitment to reaching a comprehensive solution on Cyprus for the benefit of all Cypriots.

The leaders of the Greek Cypriot and Turkish Cypriot communities are set to continue efforts to reach agreement on core issues when they meet in New York later this month for talks aimed at reunifying the island.

Cyprus was among several issues discussed today between Mr. Ban and Foreign Minister Ahmet Davutoglu of Turkey during their meeting in Beirut, where the Secretary-General is currently on an official visit. They also discussed the situation in Syria, as well as Iran. 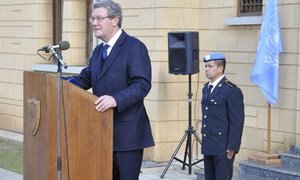 The leaders of the Greek Cypriot and Turkish Cypriot communities will continue to make efforts to reach agreement on core issues when they meet near New York later this month for talks aimed at reunifying the island of Cyprus, a United Nations envoy said today.