Supermodel and United Nations Goodwill Ambassador Gisele Bündchen has visited Kenya to experience firsthand the reality of energy poverty and to see how lives are being transformed in the East African country by making sustainable energy accessible to those not connected to the national grid.

“Energy affects everything,” the Brazilian fashion icon and Goodwill Ambassador for the UN Environment Programmes (UNEP) said yesterday at a news conference in the capital, Nairobi, where the agency is based. “Children can study at night when they have access to electricity. If we can bring electricity to everyone, we can help people to survive,” she said.

“It’s unjust if people do not have access to electricity. Energy for all is achievable. Just two per cent of global investment is needed,” she added, speaking a week before the global launch of the International Year of Sustainable Energy for All.

She visited Kibera, East Africa’s largest slum, to see biogas centres where human waste is used to produce power and Kisumu in the west, where she took part in collecting firewood and learned about fuel-efficient stoves. She also travelled to the Mount Kenya region in central Kenya, where a micro hydro-electric power station is supplying electricity to over 2,000 households.

One in five people on the Planet do not have access to electricity. In Sub-Saharan Africa some 70 per cent of the population have no electricity, while in Kenya only 18 per cent of households have power.

Many families across the world still depend on firewood for cooking, which produces toxic smoke that harms the health of women and children.

“We don’t hear about this and yet the solutions are so simple,” said Ms. Bündchen, who has recently been named the ‘world’s greenest celebrity.’

UNEP Executive Director, Achim Steiner, called for a change of thinking on energy.

“In Africa two thirds of the population still do not have access to energy. There are solutions at the local and community levels. I have a dream that with photovoltaic energy we can build grids up from the bottom and that one day we will see rural areas generating electricity and selling energy to the cities,” he said.

Kenya is increasingly developing its geothermal, wind, solar and hydro power resources at the local level.

UNEP is working to realize and to accelerate the use of renewable energy within the overall theme of a Green Economy, with a special emphasis on Africa, and Kenya in particular.

The new UN office complex in Nairobi, which Ms. Bündchen visited and which houses UNEP and the UN Human Settlements Programme (UN-Habitat), has 6,000 square metres of solar panels and generates as much electricity as its 1,200 occupants consume. 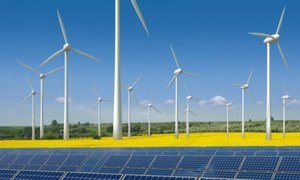 Ban calls for support for access to affordable energy in Africa

Secretary-General Ban Ki-moon today call for greater support of efforts to provide 600 million people in Africa with affordable and sustainable energy to enable the continent accelerate social and economic development.