12 January 2012
As Haiti marks the second anniversary of the massive earthquake that claimed the lives of more than 200,000 people and devastated an already poverty-stricken country, Secretary-General Ban Ki-moon urged continued international support for recovery and rebuilding.

He pointed out that despite considerable achievements, including in rubble removal and the resettlement of displaced persons, many Haitians remain in need of international assistance following the 7.0-strength quake that struck on 12 January 2010.

“The Secretary-General therefore calls on the international community to continue its vital support,” his spokesperson said in a statement issued last night.

The Secretary-General paid tribute to the Government and people of Haiti, who have made important strides in rebuilding their country, and honoured the memory of those lost, including 102 United Nations personnel.

He spoke by telephone to President Michel Martelly yesterday and reiterated the UN’s continued commitment to standing by the Government and people of Haiti on the path to a secure and prosperous future.

As Haiti moves from crisis to recovery and long-term development, the UN looks forward to strengthening its partnership with the country to ensure effective support and funding of the countries priorities, Mr. Ban told the President.

The Secretary-General, in a separate message, paid tribute to the UN staff who continued working among the stricken people, despite having lost more than 100 of their colleagues, saying that the best way to honour the memory of the departed is to carry on helping the country.

“And you have done so,” he said in the message, which was delivered to a ceremony in the capital, Port-au-Prince, by Anthony Banbury, the Assistant Secretary-General for the Department of Field Support.

“So many of our international staff stayed on during these difficult two years. Our extraordinary local staff has been the best face of our partnership with the Haitian people throughout these testing times.

“Despite the most challenging circumstances, you persevered. And you have made an enormous difference in the life of Haiti and its people,” said Mr. Ban.

The UN World Food Programme (WFP) said today it has, working with the Government and partners, made significant progress in improving food security, although much more remains to be done. The agency continues to provide food assistance to 1.5 million people every month, according to a pres release.

About 1.1 million children are receiving daily nutritious meals under Haiti’s National School Meals Programme, in more than 3,000 schools across the country, while about 240,000 children under the age of five and pregnant and breast-feeding mothers receive specialized products to boost nutrition.

In the immediate aftermath of the earthquake, WFP provided emergency food assistance to some four million Haitians. Following the initial emergency response, which helped prevent a food crisis, the Government of Haiti asked WFP to work on a range of programmes to support recovery efforts and improve food security in the country.

Support to local agriculture has been one of the lynchpins of the recovery programme, connecting the school meals programme to local producers of milk, maize and rice.

After the earthquake, WFP’s temporary employment projects have created over 200,000 jobs for heads of households, improving food security for one million people and contributing to earthquake recovery.

“As we pay homage to the victims of the devastating 2010 earthquake and their families, we are reminded every day that our work is far from over. We must maintain the capacity to work with the Government and our partners to continue improving food security in Haiti,” said Ms. Kaulard.

The head of the UN International Strategy for Disaster Reduction (UNISDR), meanwhile, also took note of the significant progress made over the past two years in dealing with the consequences of the earthquake.

“The resilience of the Haitian people over the last two years has been heroic as they seek to recover from a disaster of enormous magnitude,” said Margareta Wahlström, who is also the Secretary-General’s Special Representative for Disaster Risk Reduction.

“They have accomplished much in their efforts to re-build their country and re-house their people while also coping with other calamities, including cyclones and an ongoing cholera epidemic.”

She said that the tragedy had helped raise global understanding of the importance of disaster risk reduction in the context of rapid urbanization, seismic risk, population growth and widespread poverty.

“It confirmed that the authorities need to take the subject of risk reduction seriously, even in cities and regions that may not have experienced earthquakes or related tsunamis for hundreds of years. The UN is adapting its approaches to assessing risk to natural hazards to ensure that such potentially devastating events are better understood,” said Ms. Wahlström. 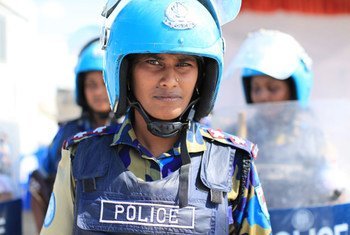 11 January 2012
It is a lesser known reality of the earthquake that devastated Haiti on 12 January 2010 and left more than 200,000 dead. The merciless disintegration of the Haitian State created a situation of utter chaos for the country’s most vulnerable.