UN Photo/Iason Foounten
SRSG Ian Martin makes a point during a meeting with local military and civilian councils of revolutionaries in the city of Zawia west of Tripoli during a visit to Libya on 10.11.11.
10 January 2012

The United Nations and the Libyan authorities today signed an agreement establishing the legal framework under which the UN mission set up last year to support the country’s post-conflict reconstruction efforts will operate.

The status of mission agreement between the UN Support Mission in Libya (UNSMIL) and the Libya’s interim Government lays out the rights, responsibilities and procedures for both signatories, with respect to the deployment, presence and safety of UNSMIL operations and personnel in fulfilling the mission’s Security Council-authorized mandate.

Ian Martin, Special Representative of the Secretary-General and head of UNSMIL, signed agreement in the Libyan capital, Tripoli, on behalf of the UN, while the country’s Minister for Foreign and International Cooperation, Ashur Bin Khayyal, signed for the Government.

“Today, Libya will be listened to with respect at the United Nations, and Libyans will be recognized as people who have courageously asserted their dignity, and in doing so have risked – or in too many cases, laid down – their lives,” said Mr. Martin.

“Your interim Government and a vibrant civil society are addressing the enormous challenge of making the principles of democracy and human rights into a reality, in a complex post-conflict environment.

“As I speak, United Nations electoral experts are sharing their experience in order to help Libyans to shape the first elections most Libyans will ever have experienced. Together with public security and transitional justice, this is one of the three priority areas for which you have requested United Nations support,” he added.

The Security Council last month extended UNSMIL’s mandate until the middle of March and expanded its tasks to include assisting the transitional Government in its efforts to address the threat of arms proliferation.

The mission was established by the Council last September for an initiative period of three months. Its initial mandate was to support the National Transitional Council (NTC) in its reconstruction efforts after the end of the conflict, including restoring the rule of law, drafting a new constitution, promoting reconciliation and preparing for elections. 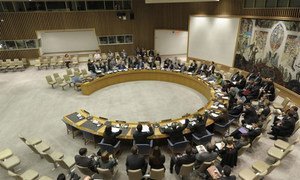 The Security Council today extended the mandate of the United Nations mission in Libya until the middle of March next year, and expanded its tasks to include assisting the North African country’s transitional Government in its efforts to address the threat of arms proliferation.