UNESCO condemns killing of journalists in the Philippines and Syria

The head of the United Nations agency in charge of defending press freedom condemned today the recent murders of journalists in the Philippines and Syria and called on authorities to investigate the crimes thoroughly.

“I call on the Philippine authorities to shed light on this crime and bring the perpetrators to justice,” said Irina Bokova, Director-General of the UN Educational, Scientific and Cultural Organization (UNESCO). “It is crucial that such an act, which violates the fundamental right to freedom of expression, does not go unpunished.”

According to the non-governmental organization (NGO) Reporters Without Borders, Christopher Guarin, a presenter on Radio Mindanao Network and editor of Tatak News Nationwide, was returning home with his wife and children last Thursday when an unidentified motorcycle opened fire on his vehicle.

Mr. Guarin was wounded from the first impact, but when he tried to escape, his attackers shot him five times. His wife said he had received various death threats in the past.

“This crime joins the long list of journalists that have been killed in the country since last year,” said Ms. Bokova. “Journalists who cover news in the Philippines should be able to work safely in order to provide citizens with free information and nourish an informed debate.”

Ms. Bokova also condemned the murder of Syrian journalist Shoukri Ahmed Ratib Abu Bourghoul who was shot on 30 December and succumbed to his injuries three days later. He was targeted by a group of armed men on his way home in the town of Darya, near the capital, Damascus, after presenting his weekly radio show.

Ms. Bokova called his assassination an attack on press freedom and against the rights of journalists to carry out their mission, and urged Syrian authorities to conduct an investigation to shed light on the conditions that let to his death.

♦ Receive daily updates directly in your inbox - Subscribe here to a topic.
♦ Download the UN News app for your iOS or Android devices.
Press|Freedom 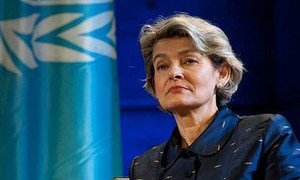 Two United Nations agencies today called on Russian authorities to conduct an independent and transparent investigation into the recent murder of journalist Khadzhimurad Kamalov in Dagestan and to bring the perpetrators to justice.