Security Council members have called on warring ethnic communities in South Sudan's Jonglei state to engage in reconciliation and end the “cycle of conflict” that has claimed an unknown number of casualties in recent weeks.

In a press statement, issued yesterday by Ambassador Baso Sangqu of South Africa, which holds the Council presidency this month, the 15-member panel voiced deep concern at the situation in Jonglei.

“Violence in any form is unacceptable,” the statement stressed, calling on all communities in Jonglei to immediately “end the cycle of conflict and engage in a reconciliatory peace process.”

Deadly clashes between the Lou Nuer and Murle communities in recent weeks have displaced tens of thousands of civilians and led to United Nations agencies launching a major humanitarian operation to assist those in need.

Peacekeepers serving with the UN Mission in South Sudan (UNMISS) have also been deployed to the area to support the efforts of Government forces to restore peace and security, and daily air and land patrols have been stepped up to deter further attacks.

But Council members said they were concerned that UNMISS has a shortfall of operational helicopters, seriously affecting its ability to carry out its mandate in the newly independent country, and they urged Secretary-General Ban Ki-moon to continue his efforts to resolve this issue.

The statement also welcomed the efforts of the South Sudanese Government to protect civilians and mediate a solution to the crisis in Jonglei, and it urged authorities to continue their efforts to resolve the root causes of the recurring violence between the communities, which has often been linked to disputes over cattle and grazing land.

Council members voiced alarm about both the quantity and sophistication of the weaponry used in the most recent clashes, and they emphasized the need for greater security sector reform within South Sudan and for the disarmament, demobilization and reintegration of former rebel fighters across the impoverished country.

During a press briefing today, UN agencies on the ground warned about the worsening humanitarian situation and called on donors to increase their contributions. The Office for the Coordination of the Humanitarian Affairs (OCHA) said one of the main concerns was accessing areas in need of assistance, as they can only be reached by air, making it significantly more expensive to deliver aid. OCHA also highlighted its response plan, which is currently being finalized, to ensure the emergency needs of 60,000 affected people are met.

For its part, the Office of the UN High Commissioner for Refugees (UNHCR) warned that without international help, it would not be possible to respond to the multiple crises taking place in the country. In particular, the situation of 28,000 refugees in Doro camp in the Mabaan region was described as precarious, with the majority of refugees being exhausted, hungry and vulnerable.

In addition, UNHCR spokesperson Andrej Mahecic said the recent fighting in Sudan’s Southern Kordofan and Blue Nile states has forced more than 80,000 refugees to flee across the border into Unity and Upper Nile states in South Sudan, adding to the thousands of refugees already in need of assistance in the country.

Mr. Mahecic said UNHCR would continue to deliver assistance and highlighted the agency’s massive humanitarian airlift that began at the end of last month, which flew in some 280 tons of aid into the Malakal and Mabaan regions, benefiting 50,000 refugees. 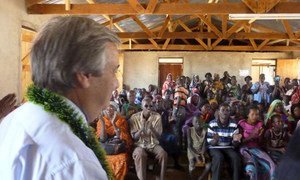 The head of the United Nations refugee agency today urged the international community to show greater solidarity with South Sudan as it strives to cope with enormous humanitarian challenges as tensions between communities cause internal displacement amid a refugee influx from Sudan.