Mothers and their children near Pibor, in Jonglei state, South Sudan, who have been displaced by ethnic tensions in the area
6 January 2012

A massive humanitarian operation to bring succour to people affected by inter-ethnic violence in South Sudan’s state of Jonglei is under way with United Nations having carried out relief needs assessments in most of the affected areas over the past 72 hours, a UN official said today.

Assessments have been carried in Pibor, Likuangole, Boma and Walgak, according to Elisabeth Byrs, spokesperson for the UN Office for the Coordination of Humanitarian Affairs (OCHA), who told reporters in Geneva that more evaluations would be carried out in Fertait and Bilait.

UN agencies and the UN Mission in South Sudan (UNMISS) reported significant humanitarian needs in all areas assessed and they believe that a similar situation prevails in areas yet to be visited, according to Ms. Byrs. An estimated 50,000 people are thought to be in need of help.

Last weekend a column of about 6,000 armed youths from the Luo Nuer tribe attacked the town of Pibor, where there is a concentrated Murle population, as part of ongoing clashes between the two communities related mainly to cattle rustling and grazing land. Most residents had fled the town before the attack, seeking refuge in the bush.

Ms. Byrs added that while the situation was currently calm, the influx of people returning to Pibor continued and the number of those registered stood at 942 households or 4,710 individuals by yesterday.

In Boma in the south-eastern part of Pibor County, some 1,700 people had been registered as displaced as of yesterday. Monitoring for further outbreaks of violence would continue, she added.

“Right now our primary aim… is to try and identify where the approximately 60,000 people who have fled from their homes are,” said Lise Grande, the UN Humanitarian Coordinator for South Sudan, in an interview with UN Radio. She said UNMISS is continuing to carry our air reconnaissance in an effort to find those who fled their villages.

“In the case of many of the cities where people evacuated from, we are seeing relatively large return movement... but there a number of villages that were burned completely to the ground, for example, Likuangole and in that case people are not coming back and that’s because there is nothing to come back to,” said Ms. Grande.

She said that the South Sudanese Government yesterday declared Jonglei a disaster zone and appealed to humanitarian agencies to step up assistance.

“All of these areas, with the exception of Boma, can only be reached by air. So in logistical terms we have to face the fact this is going to be a very complicated operation,” she added.

The UN Children’s Fund (UNICEF) said one of five children wounded during the violence had died during medical evacuation, according to the agency’s spokesperson Marixie Mercado, who added that reports of nine children being abducted had been verified. Some 45 unaccompanied minors had been registered.

In a related development, UN High Commissioner for Refugees (UNHCR) António Guterres will travel to South Sudan this weekend and is scheduled to visit a refugee site in Mabaan on Sunday, according to a spokesperson for the UN refugee agency in Geneva.

UNHCR is supporting the newly-independent country’s Government to reintegrate some 660,000 returnees, including 360,000 people who have come from Sudan and some 300,000 who went back other neighbouring countries, said the spokesperson, William Spindler.

Recent fighting in Sudan’s Southern Kordofan and Blue Nile states has forced some 75,000 Sudanese refugees to flee across the border into South Sudan’s Unity and Upper Nile states. An estimated 23,000 other Sudanese have sought refugee status in Ethiopia.

Mr. Guterres will proceed to Khartoum, the Sudanese capital, on Tuesday and from there travel to Kassala in eastern Sudan, the scene of one of the most protracted refugee situations in the world.

Some 70,000 refugees, most of them Eritreans reside in 12 camps with the host community facing similar hardship – acute poverty, drought, lack of access to health and education, land degradation and high unemployment. Mr. Guterres will discuss programmes aimed at enhancing self-reliance with local authorities. 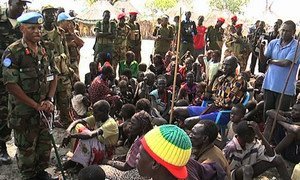 The United Nations is stepping up its peacekeeping presence in the troubled South Sudanese state of Jonglei in the wake of recent inter-ethnic violence that has displaced tens of thousands of people and killed an unknown number of others.