“Ending hunger requires the commitment of everyone: neither FAO nor any other agency or government will win this war alone,” said Director-General José Graziano da Silva at a press conference in Rome, where the agency’s headquarters are located.

He stressed the need for FAO to work closely and transparently with its member States, other UN agencies, the private sector and civil society to achieve its goals, particularly in scaling up support to poor countries.

The global eradication of hunger remains his top priority, Mr. Graziano da Silva said, adding he was also focusing on developing more sustainable methods of food production and consumption, increasing fairness in the way food is managed, and completing the process of internal reform at FAO.

He also told UN Radio that the ongoing food crisis – the prices of many staple crops have spiked in recent years – will be among the biggest challenges he faces during the next 12 months.

“The prices will maintain high compared with the other years, previous years, and the volatility will also be very high,” he predicted.

Mr. Graziano da Silva said the Sahelian region of West Africa, where many countries are facing “food deficits” and unable to feed their populations, would be a key target of FAO’s programmes.

A Brazilian national, Mr. Graziano da Silva took over as Director-General of FAO on Sunday, succeeding Jacques Diouf and becoming the first Latin American to head the agency since it was created in 1945. 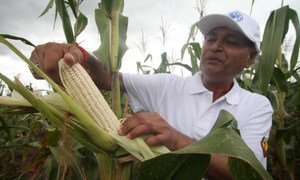 A new United Nations initiative in Mozambique aimed at increasing the quality of seeds will help the African country capitalize on its arable land and unlock its potential, the Organization’s agricultural agency announced today.