“Strengthening the capacity of local government units to address disaster risks and hazards is a major component of the national strategy for disaster resilience,” said Ms. Legarda. “A national plan, no matter how good, will remain ineffective if not translated into local plans and action.”

The tropical storm, known locally as Sendong, swept across the southern Philippine island of Mindanao on 17 December, killing more than 1,000 people in massive flooding, flash floods and landslides. Some 300,000 people have been displaced, many of whom are taking refuge with relatives or in makeshift structures.

Following the storm, Ms. Legarda called on local authorities throughout the country to invest in flood infrastructure, including river embankments, pumping stations, flood walls, drainage systems, storm drains, canals and flood retention areas, noting the high number of casualties caused by Washi could be due to a lack of awareness of the risks involved.

“I don’t think there was any seriousness and understanding of the gravity of Sendong. Even if there had been sufficient warning, there was no preparedness,” Ms. Legarda said. “A clear and effective early warning and response system using red flags like in Bangladesh mush be established.”

UNISDR is the secretariat of a strategic framework – known as the International Strategy for Disaster Reduction and adopted by UN Member States in 2000 – which aims to guide and coordinate efforts to achieve substantive reduction in disaster losses and build more resilient communities and countries. 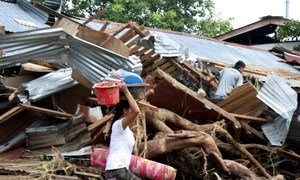