28 December 2011
A new United Nations initiative in Mozambique aimed at increasing the quality of seeds will help the African country capitalize on its arable land and unlock its potential, the Organization’s agricultural agency announced today.

The effort, launched by the Food and Agriculture Organization (FAO), seeks to help Mozambican farmers by increasing the quality of local seed production and boosting the country’s overall crop yields.

“Increasing agricultural production in a country whose yields are among the lowest in the world starts with boosting productivity,” said José de Graça, the coordinator for the FAO project in the country.

According to FAO, only 10 per cent of Mozambique’s arable land is cultivated and most farmers still use sub-standard seeds. Following a surge in global food prices during the 2007-2008 biennium, the UN initiative has become central to guaranteeing food stability across the country.

“It has become crucial to increase production,” said Mahomed Valá, national director of agrarian services in Mozambique’s agriculture ministry. “At least 15 per cent of our farmers should have access to quality seeds in five to six years.”

Throughout the project, FAO worked with 15 seed companies 1,000 small-scale seed growers to stimulate local seed production across seven of Mozambique’s provinces. An estimated 3,500 tons of seeds for crops, including maize, rice, beans, soybeans, and sunflower, were grown.

The programme also provided support to 25,000 smallholder farmers, who received nearly 1,000 tonnes of maize and rice seeds as well as fertilizer and tools at subsidized prices.

Paulo Calção, a farmer from the country’s central Manica province, welcomed the initiative, noting that thanks to FAO’s direct support, his last harvest produced 2,880 kilograms of maize. He confirmed he would continue using the improved seeds even if the subsidies ceased.

While FAO called the gains stemming from the project “significant,” it also warned that an estimated four million smallholder farmers continue to require support and that more effort is needed to offset Mozambique’s annual food deficit of one million tons. 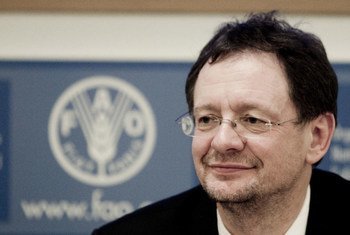