A group of children displaced by floods, following the passage of tropical storm Washi, living in an evacuation centre in Iligan City, Philippines
28 December 2011

A $3 million allocation from the United Nations relief fund has enabled agencies to provide initial assistance to survivors of the tropical storm that devastated parts of the Philippines 11 days ago, as the death toll rose to nearly 1,250, the UN humanitarian office reported today.

“These were the first funds that got on the ground,” said Kirsten Mildren, spokesperson for the Asia and Pacific regional office of the UN Office for the Coordination of Humanitarian Affairs (OCHA), referring to the grant from the UN Central Emergency Response Fund (CERF).

“The storm actually hit just a few days before Christmas… a week when donors are away, their offices are closed and so there hasn’t been an amazing outpouring of support that you normally see after an emergency of this nature and so the CERF funds were instrumental in making some of these life-saving activities really start,” Ms. Mildren told UN Radio.

The UN Children’s Fund (UNICEF) and the UN World Food Programme (WFP) received $1 million each from CERF, enabling them to provide emergency water and sanitation services in evacuation centres, and deliver food and logistics support, according to OCHA, which manages the fund.

“We are using the funds to provide emergency food to 81,000 displaced people over the next three months,” said Asaka Nyangara, the WFP Deputy Country Director for the Philippines. “Already we have started distributing high-energy biscuits to evacuees in the centres,” he added.

The International Organization for Migration (IOM) also received $1 million from CERF, enabling it to rapidly build up its capacity to provide emergency shelter materials for the displaced and to start repairing evacuation centres.

OCHA reported today that the death toll currently stands at 1,249, with numerous others still missing.

The acting UN Humanitarian Coordinator for the Philippines, Soe Nyunt-U, said that without the CERF allocation, urgent UN interventions would have been delayed.

The grant from CERF was its third allocation for relief operations in the Philippines this year and brings to $11.5 million the total amount received.

UN agencies and their humanitarian partners are seeking an additional $28.6 million to what was already requested earlier this month to respond to the needs of people affected by Washi. 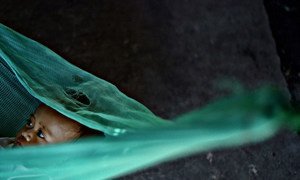 As the death toll in the Philippines from the impact of tropical storm Washi passes 1,100, the United Nations continues to both rush aid to storm-affected areas and stress the need to focus renewed attention on the thousands of children hit by the disaster.