The United Nations Children’s Fund (UNICEF) has hailed a new Mexican Government initiative aimed at improving child welfare as a “breakthrough” towards ensuring greater social cohesion for children and adolescents as well as boosting the country’s economic development.

In rural Mexico, 27 per cent of children live in extreme poverty compared to 8 per cent in the cities, according to a press release issued by UNICEF. Children from indigenous communities are often the most marginalized, lacking access to quality education and other crucial services.

“Mexico’s economic trends are promising. But behind positive national averages and Mexico being one of the world’s 15 largest economies in terms of gross domestic product (GDP), lies a reality of poverty and marginalization of thousands of children,” warned Susana Sottoli, UNICEF’s representative in Mexico, who added that while parts of the country have development levels close to those of Scandinavia, others are more in line with sub-Saharan Africa.

As a result, the new programme, an annex to Mexico’s 2012 federal budget, will designate $41 billion – over 15 per cent of the total annual budget – of investment to spending measures targeting education, children’s health and nutrition, and protection against abuse and violence. The annex was approved by the Mexican Government on 22 December.

“This is essential for the present of hundreds of thousands of children – so that they may be placed in the best possible position to exercise their rights,” Ms. Sottoli stated.

“Additionally, if children do not grow healthy and receive quality education today, they are unlikely to contribute to their country’s development in the years to come. This innovation is a breakthrough towards greater transparency in the promotion of equity, and is also bound to benefit the national economy, as well as inclusiveness and cohesion,” she said, pointing out that the Mexican initiative could “show the path towards equity in the region and beyond.”

The new measure is the result of close cooperation between UNICEF and Mexico’s finance ministry, which has also established monitoring and evaluation mechanisms to produce quarterly reports on the implementation of the new expenditure plan.

UNICEF teams with McDonald's to raise funds for children 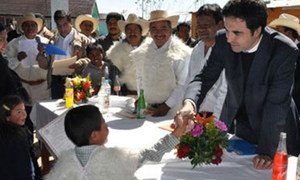 Thousands of children from indigenous communities in the southern Mexican states of Chiapas and Oaxaca received birth certificates after sustained calls from the United Nations Children’s Fund (UNICEF) for free birth registration.