Ban deplores use of force to settle differences in Guinea-Bissau

Secretary-General Ban Ki-moon today condemned the use of force to settle differences in Guinea-Bissau and called for the respect of the lawful civilian authorities in the West African country.

Media reports indicated that Guinea-Bissau’s navy commander has been arrested after disturbances yesterday, which some of the country’s senior officials described as a coup attempt. The reports quoted the army as saying there were more clashes in the capital, Bissau, overnight.

Mr. Ban, in a statement issued by his spokesperson, encouraged the country’s authorities to respect due process in the investigation of the reported events, saying he is following the situation. He reaffirmed the support of the United Nations to the peacebuilding process in the country.

“The primacy of the lawful civilian authorities according to the constitution must be respected,” the statement noted.

A week ago the Security Council renewed the mandate of the UN Integrated Peacebuilding Office in Guinea-Bissau (UNIOGBIS) until February 2013 to consolidate peace and stability and urged the Government and other political actors to work together towards that goal.

Established by the Council in 2009, the UNIOGBIS is tasked with promoting stability in Guinea-Bissau, which has been beset by coups and political instability since independence from Portugal in the early 1970s.

Last month, Joseph Mutaboba, the Secretary-General’s Special Representative and head of UNIOGBIS, told the Council that while Guinea-Bissau has made important progress, including in police reform, it is vital that the country presses ahead with other challenges such as the launch of a pension fund for ex-military and security personnel and improving the judicial sector.

Mr. Mutaboba added that it is important to build on recent gains as the country prepares for legislative elections next year.

Guinea-Bissau is one of six countries on the agenda of the UN Peacebuilding Commission – along with Burundi, Guinea, Sierra Leone, the Central African Republic (CAR) and Liberia – set up in 2005 to help countries emerging from conflict make an irreversible transition from war to sustainable peace. 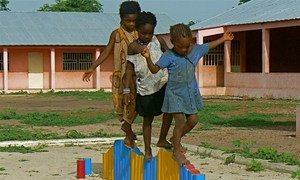 The Security Council today renewed the mandate of the United Nations office that is assisting Guinea-Bissau to consolidate peace and stability, and called on the Government and all political actors to work together towards this goal.