UNFPA is working to provide essential reproductive-health supplies to help more than 12,000 pregnant and lactating women in evacuation centres
23 December 2011

The needs of more than 12,000 pregnant and lactating women in areas affected by tropical storm Washi in southern Philippines are the main focus of the United Nations Population Fund (UNFPA), which said today it is mobilizing funds and supplies to provide medical services.

At least 22 village health centres have been damaged or totally washed away by the floods, and pregnant women in labour are currently being referred to regional hospitals, which are already overcrowded with regular patients.

According to a news release issued by UNFPA, youth volunteers are “collecting vital data about pregnant, post-partum and lactating women, as well as other vital statistics such as the number of young people in these centres.”

UNFPA is also working in collaboration with the Government and local organizations to conduct psycho-social counselling and setting up emergency referral systems for survivors of gender-based violence.

In addition, the agency will distribute clean delivery kits to some 8,500 pregnant women to ensure safe deliveries. Each kit includes soap, a clean razor blade and string to cut and tie the umbilical cord, a plastic sheet and a blanket to protect the baby from hypothermia.

Medical teams composed of doctors, midwives and other health workers are also being deployed, as well as reproductive and health care kits. Nearly 35,000 hygiene kits will be distributed to affected women and girls, including 4,200 mothers who are breastfeeding, in and around the evacuation centres. Kits include basic sanitary supplies, such as soap, changing garment, towels, sanitary pads and toilet paper.

A number of UN agencies are providing assistance on the ground, including the World Health Organization (WHO), which has sent emergency supplies to prevent water-related diseases. These include 416,000 bottles of water purification tablets, 20,000 doses of oral rehydration salts and 4,000 containers of zinc sulphate for treatment of diarrhoea and 612 litres of hand sterilizer.

According to the latest figures released by the Philippine Government, over 640,000 people have been affected by the tropical storm, known locally as Sendong, which ravaged the country last weekend. 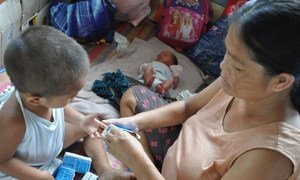 The United Nations and its humanitarian partners are seeking an additional $28.6 million to what was already requested earlier this month to support victims of the Sendong tropical storm in southern Philippines.