The United Nations World Food Programme (WFP) has condemned the killing today of two staff members and a colleague with a partner organization in Somalia, an act of violence the agency says illustrates the risks that relief workers face in one of the world’s most dangerous places.

Secretary-General Ban Ki-moon also strongly condemned the killing and urged authorities in Somalia to ensure the safety of humanitarian workers, in a statement issued by his spokesperson.

Mr. Ban extended his sympathy and condolences to the families and friends of the three humanitarian workers and their colleagues, saying he expected those responsible for the murder to be swiftly brought to justice.

The attack took place in Mataban town in Somalia’s central Hiran region, where the two WFP employees – Muhyedin Yarrow and Mohamed Salad – as well as Abdulahi Ali of the non-governmental organization (NGO) known as Doyale were on a mission to monitor food aid distribution.

The gunman who shot the three aid workers reportedly gave himself up after committing the crime and was taken into custody by local authorities. WFP operations are temporarily suspended in Mataban while the incident is being investigated.

“WFP condemns the killing of people who devote their lives to helping others and extends its deepest condolences to the families of the victims,” the agency said in a statement.

Mr. Yarrow, 54, had worked with WFP for 13 years, during which he served in the Somali towns of Baidoa, Wajid and Galkayo. Mr. Salad, 28, joined WFP’s relief operation in Galkayo two years ago.

WFP is providing food to internally displaced persons (IDPs) and malnourished children in Hiran, which was badly affected by this year’s drought-induced food shortages, but was not officially declared to be in a state of famine, as were some other parts of Somalia. 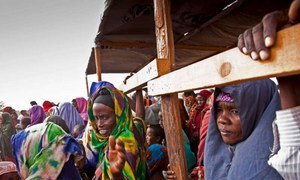