The United Nations peacekeeping mission in Côte d’Ivoire today encouraged the Government to implement measures to strengthen discipline within its armed forces and “separate the wheat from the chaff.”

The UN Operation in Côte d’Ivoire (UNOCI) reiterated its readiness to continue providing support to the Government as its tries to end rampant human rights violations committed by members of the Forces Républicaines de Côte d’Ivoire (FRCI), which fought on the side of President Alassane Ouattara during the post-election crisis that ended in April.

UNOCI spokesman Hamadoun Touré told the mission’s weekly news conference in the country’s commercial capital, Abidjan, that cases of abuse by FRCI were causing anger among civilians at a time when efforts are under way to strengthen social cohesion and reconciliation.

He cited cases of arbitrary arrests and illegal detentions in the Abidjan commune of Attécoubé and in Bedy Goazon, a village in the Guiglo area in western Côte d’Ivoire. Two detainees in the Attécoubé case were released following UNOCI’s intervention.

The mission is encouraging the Ivorian authorities to implement measures to reinforce discipline and “separate the wheat from the chaff,” it stated in a news release.

Regarding Sunday’s events in the western town of Vavoua, where disputes between the FRCI and local residents led to the death of six civilians, Mr. Touré said that UNOCI continues to monitor the situation.

The mission had escorted the FRCI elements arrested in connection with the violence to Abidjan and handed them over to the Ivorian judicial authorities.

Mr. Touré also said that the Ivorian security forces and UNOCI peacekeepers were conducting joint patrols in many towns, including Vavoua, and that the patrols were being intensified in the west, especially along the border with Liberia. 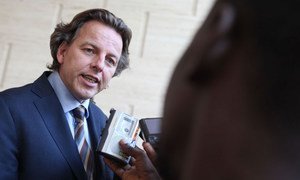 The top United Nations official in Cote d''Ivoire today deplored the deadly clashes in the west of the country that have reportedly killed at least six people this weekend.