22 December 2011
Libya’s interim authorities are working to respond to the immediate needs of the people, the top United Nations envoy there told the Security Council today, noting that the fledgling government faces the challenge of meeting high expectations and building accountable institutions.

“The public mood in Libya is gradually changing, as it becomes increasingly focused on issues that were central to the demands of the revolution,” said Ian Martin, the Secretary-General’s Special Representative and head of the UN Support Mission in Libya (UNSMIL).

“These include improved institutional performance that meets popular expectations, and accountability and transparency in public affairs,” he said.

He cautioned that the interim Government is working in a security environment that will remain uncertain until decisions on the future of the revolutionary fighters, who played a crucial in the toppling of the regime of Colonel Muammar al-Qadhafi in October, are made and implemented.

“Unless the security situation is addressed quickly and effectively, interests of various stakeholders may become entrenched, undermining the legitimate authority of the State,” said Mr. Martin.

He told the Council that UNSMIL’s electoral team has been working intensively with the National Transitional Council’s (NTC) Elections Committee, which is preparing for the election of a National Congress that will become the basis for the formation of a successor government, as well as the drafting of a new constitution.

The UN Mission also made progress in supporting Libya’s interim authorities in coordinating bilateral and multilateral assistance to rehabilitate the police force and to strengthen border security and management, Mr. Martin said.

It has also continued to monitor conditions under which detainees are being held and pressing the authorities to bring all places of detention within a legal framework, with a view to swiftly reviewing all cases to either release the detainees or bring them to a fair trial.

Mr. Martin told the Council that the decision by its Sanctions Committee to remove the Central Bank of Libya and the Libya Foreign Bank from the purview of UN sanctions has been warmly welcomed by the Government.

He said that there has been progress in accounting for the additional chemical materials and weapons at two previously undeclared sites, and that Libya had on 28 November submitted to the Organization for the Prohibition of Chemical Weapons a detailed declaration of the chemical materials, which were then transferred to the previously declared storage site.

The UN International Atomic Energy Agency (IAEA) had also on 9 December completed its visit to Libya after inspecting the Tajoura Nuclear Facility in Tripoli and the yellow cake storage facilities in Sabha.

“The IAEA conveyed its overall conclusion that none of the previously recorded nuclear materials in either facility had gone missing,” said Mr. Martin.

“However, while there was no immediate health or radiation risk, an expeditious sale and transfer of the approximately 6,400 barrels of nuclear materials in Sabha was strongly recommended as the storage condition is deteriorating.”

On the humanitarian situation, Mr. Martin said that the Libya Humanitarian Relief Agency estimates that there are almost 63,000 internally displaced persons (IDPs) in need of assistance.

Over 75 per cent of the people displaced from the town of Bani Walid and surrounding areas had returned to their homes, but the level of return to Mr. Qadhafi’s hometown of Sirte remains below 50 per cent as a result of security concerns and the presence of explosive remnants of war.

Meanwhile, following its decision on 16 December to exempt the Central Bank of Libya and the Libyan Foreign Bank, the Council’s Sanctions Committee said in a statement that it will continue to work to ensure that all frozen assets are made available for the benefit of the Libyan people.

UNICEF urges protection of children amid violent clashes in Egypt 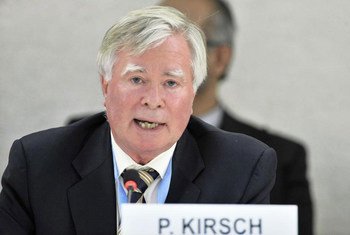 20 December 2011
A three-member panel tasked by the United Nations with probing human rights violations committed during the Libyan conflict said today it is encouraged by the Government’s commitment and initial steps taken to address the abuses that occurred.