The United Nations and its humanitarian partners are seeking an additional $28.6 million to what was already requested earlier this month to support victims of the Sendong tropical storm in southern Philippines.

The emergency revision of the Philippines (Mindanao) Humanitarian Action Plan 2012 aims to provide clean water for drinking and bathing, food, emergency shelter and essential household items to the 471,000 worst-affected people in northern Mindanao for a period of three months.

The appeal also includes debris clearing to reduce health risks as well as logistical services that ensure life-saving programmes can be delivered without interruptions to those who need it the most.

The initial appeal, which was launched last week, asked for $38 million for the central region of Mindanao. However, after the UN Office for the Coordination of Humanitarian Affairs (OCHA) further surveyed the situation on the ground, the appeal was revised for an additional $28 million to assist the northern Mindanao region and in particular the cities of Cagayan de Oro and Iligan.

The UN Resident and Humanitarian Coordinator in the country, Soe Nyunt-U, who returned from a two-day visit to the two cities yesterday, said he was shocked by the scale of destruction that he saw.

“It was as if the cities were hit by an inland tsunami,” he said. “Entire areas were completely flattened, only a few sturdy buildings remain standing, and these had sustained a lot of damage. Debris from houses, buildings and other structures that had been destroyed by the storm was all swept out to the sea, leaving huge areas devoid of all traces of habitation.”

According to the latest figures released by the Philippine Government, more than 1,060 people are dead or missing and 28,030 homes have been damaged or destroyed. In addition, more than 43,600 people are taking shelter in 51 evacuation centres and another 266,000 people are staying with relatives or in makeshift structures. The figures are expected to rise as more information becomes available.

“The overflowing generosity of the Filipino people is saving lives,” said Mr. Soe, adding that “the UN and humanitarian partners are working very hard to support Government-led efforts. The needs are, however, overwhelming.”

UN agencies have already boosted their relief efforts in the country over the past few days, including the UN World Food Programme (WFP), the UN World Health Organization (WHO) and the UN Children’s Fund (UNICEF).

UNICEF said it was particularly concerned with providing clean water to children as the water systems for both Cagayan de Oro and Iligan have been destroyed, leaving most residents with no safe, reliable source of water.

“A lack of clean water and sanitation facilities is of great concern at the present time, as we know children are highly vulnerable to diarrhoeal disease and dehydration,” said Anselme Motcho, acting head of the UNICEF office in the Philippines. “We are also carefully monitoring the safety of children in the very overcrowded evacuation centres,” he added.

OCHA stated in a news release that the humanitarian response plan will be revised again within six weeks to reflect ongoing assessments and evolving humanitarian needs. 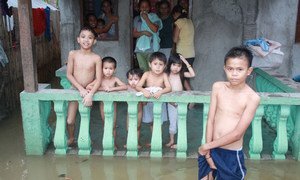 A senior United Nations relief official today called for a surge in financial support to provide humanitarian aid to hundreds of thousands of people driven from their homes by conflict on the Philippine island of Mindanao.