The next few weeks will be critical as Yemen seeks to address its political, security and humanitarian challenges, a United Nations envoy stressed today, adding that the support of the international community will be vital to the transition process.

“Now is not the time for complacency,” Jamal Benomar, the Secretary General’s Special Adviser for Yemen, told reporters in New York after briefing the Security Council behind closed doors.

Warring factions in Yemen signed an agreement last month on a transitional settlement under which President Ali Abdullah Saleh agreed to hand over power to Vice President Abed Rabbo Mansour al-Hadi. A new Government of National Unity was sworn in and presidential elections have been scheduled for 21 February.

“The situation in Yemen remains highly fragile, and the political agreement will be impossible to implement without the continuous commitment and cooperation of political and other leaders throughout the country,” said Mr. Benomar, who just returned from his seventh visit there.

“I remain hopeful, despite the many challenges that lie ahead, that the agreement provides for new, inclusive institutions and processes, and opens the way for reform that can meet expectations of those calling for change,” he stated.

He said the next 60 days, leading up to the polls, will be fraught with challenges and “ups and downs,” and now is the time for the international community to scale up its support to Yemen’s recovery. The UN, for its part, has deployed electoral experts to assist during this critical period.

Overall, he reported that the process is moving forward and the agreement is being implemented. The Government has already taken action to restore peace and stability, including the removal of barricades and checkpoints and the withdrawal of armed groups from public and private facilities.

“Serious commitment from all sides will be required to make these inroads to stability a success,” said Mr. Benomar, who noted that the UN will continue its close engagement and monitor progress.

“We want to see a Yemen where the streets belong to the people, not to the militia. We want to see Yemenis able to go about their daily lives and grow their communities, where civic leaders are the ones shaping the future of the country, not those with arms,” he stated.

He added that the Security Council is following the situation in Yemen closely. “Indeed, the world is watching the peace process in Yemen and there will be consequences for those who think they may derail the peace process.”

He stressed that the continuous engagement of all actors will be critical and long-term stability will depend on the success of a genuinely participatory process.

“The international community has pressed hard for the sides to reach a political settlement and these calls have been heeded. Now donors have to back up their calls for reform by providing the support that is needed to implement the agreement and see the country through this transition period.” 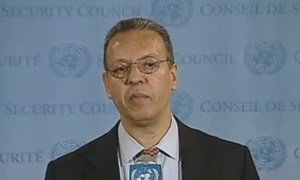 Yemen’s new Government has taken steps to restore peace and stability in the country, the United Nations special envoy for the country said today, explaining that the new measures include instructions that roadblocks be removed, soldiers return to their barracks and militias go back to their villages.